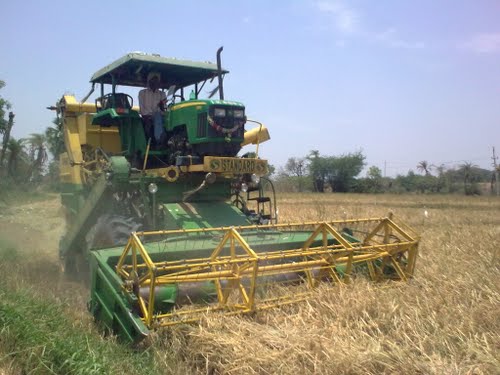 Chandigarh, April 6 (IANS) The Punjab government on Monday announced a ban on harvesting of the wheat (Rabi) crop with combine harvesters from evening to morning, a senior officer said here.

The ban will be from 7 p.m. to 10 a.m. and shall remain enforced till May 29.
Director, agriculture department Mangal Singh Sandhu said that the harvesting of crop has been banned during this time to ensure that the produce would be clean and dry as per the norms.
He said that as crop absorbs moisture during the night due to dew and its harvesting leads to higher moisture content, affecting its purchase by procurement agencies.
To tackle the problem of stubble (crop residue) burning, Sandhu said that the department has prepared the plan for promoting ultra-modern straw choppers in the state by providing maximum subsidy on it.
“In a move to get rid of menace of straw burning in the state, the government has announced an incentive for each district and village, with a financial grant of Rs.1 crore and Rs.1 lakh respectively, which were free from the stubble burning,” he said.
Sandhu said that the decision has been taken to curb the practice of stubble burning, which was not only health hazard but detrimental to the fertility of soil.
“Resorting to punitive measures to end this menace would not yield anything and it would bring desired results only if the people were properly motivated to renounce this anti-environment and pollution causing phenomena,” he said.
He said that agriculture experts and scientists should help create awareness among farmers not to get into a mad race of sowing the next crop early and burning stubble to clear their land.