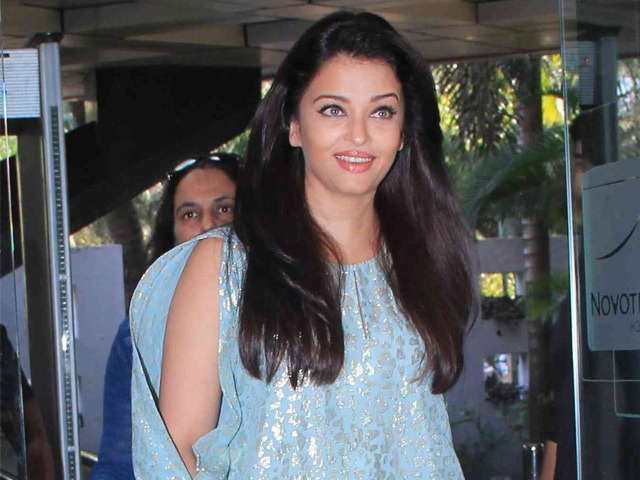 With 17,000 dedicated websites , a wax statue at London’s Madame Tussaud’s wax museum , a tulip named after her in Nether Lands , a Barbie doll named after her , married to Bachchan house hold and acknowledged as one of the most beautiful woman in the world , ‘ Padma Shri ‘ & Miss World 1999 AISHWARYA RAI BACHCHAN sure makes news every time she makes an appearance and with a new movie release after 5 years & motherhood , the entire world is eagerly awaiting her latest film JAZBAA , which is releasing this Friday all over the world. The star of acclaimed films like TAAL, GURU , HUM DIL DE CHUKE SANAM , CHOKHER BALI , RAIN COAT , DHOOM 2 , DEV DAS & JODHA AKBAR , Aishwarya Rai Bachchan’s last  film GUZAARISH may’ve been a box-office failure but she did walk away with all the critical applause and her teaming up with director SANJAY GUPTA of KAANTE , MUSAFIR & ZINDAA fame , and IRFAAN KHAN , whose latest film TALVAR is rewriting box-office history amongst art films and won critical acclaim for films like QISSA & HAIDER last year, is the talk of Bollywood right now. Based on South Korean film SEVEN DAYS , Sanjay Gupta’s JAZBAA is an action packed drama but everyone is looking forward to Aishwarya’s performance and her chemistry with Irfaan Khan and there’s no doubt that it could set the box-office ringing for some time this weekend. She is still one of the most beautiful woman in  the world but surely everyone would love to see the first movie of Aishwarya after becoming mother to Aradhyay and with good initial reports and some momentous moments with iconic SHABANA AZMI, Sanjay Gupta’s JAZBAA could take a bumper opening and could lead to some other meaty roles in the months to come as AISHWARYA RAI BACHCHAN joins Bollywood luminaries like NUTAN , SHARMILA TAGORE , HEMA MALINI & KAJOL , who triumphantly returned back to Bollywood after motherhood !!!

AKSHAY KUMAR’s SINGH IS BLING roared at the box-office and in spite of being thrashed by critics , the film became Akshay’s biggest hit and easily surpassed the previous best collections of GABBAR , BROTHERS & BABY and proved once again , that there’s no better Singh than Akshay in Bollywood. The film is racing towards Rs. 100 Crore in India and the overseas collections have also confirmed that Akshay sure has a good hold over Punjabis. Around the world as the movie saw tremendous response in North America, UK & Australia. Meanwhile, Bosky Gulzar’s TALVAR had tremendous footfall in Indian multiplexes and Irfan Khan-Taboo-Konkona Sen Sharma’s film collected over Rs. 10 Crores in the first weekend and surely has been declared a hit all over. But all eyes are on this week’s release of Sanjay Gupta’s JAZBAA with Aishwarya Rai Bachchan & Irfan Khan in lead and the South Indian production of RUDRAMMA DEVI and it’ll be interesting to see how audience react to Aishwarya after 5 years.
Shiv Sena stopped Pakistan’s GULAM ALI to pay a tribute to JAGJIT SINGH on his 4th death anniversary in Mumbai’s Shanmukhananda Hall on October 10nth and that has saddened fans all over the world. With that, it’s time to say Good Bye but not before reminding you all to enjoy AAJ KI SHAAM GEETON KE NAAM.. An Evening of GAZALS on Saturday, October 10 @ 7.30 PM at Burnaby’s SHADBOLT CENTRE FOR THE ARTS and enjoy the RED CARPET on MONDAY ,OCTOBER 12( Thanksgiving Holiday Long Weekend )  as MIKA SINGH belts out his popular Bollywood numbers with SHAIMAK VANCOUVER dancers  at Vancouver’s iconic ORPHEUM Theatre at 6.30 and for more information , KAMAL SHARMA can be reached at (604)592-9777 or (604)833-1977 or visit www.vtixonline.com and yes , this week’s YAADEIN is dedicated to REKHA , who turned 61 on Oct.10 , and you can catch it on Sunday, Oct.11th at 1 PM on SMC # 116 ! Finally, HAPPY THANKSGIVING TO ALL!