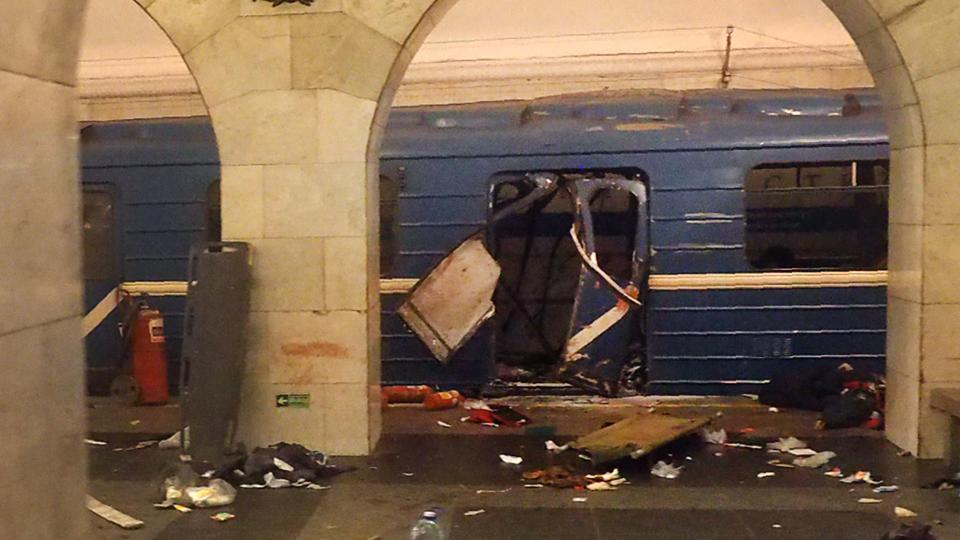 Moscow: An explosion inside a Metro train in the Russian city of St. Petersburg on Monday killed 10 passengers and injured over 20 others. The entire transit system was shut down as bomb squads and rescuers responded to the emergency.

The explosion occurred as the train was travelling between the stations Tekhnologichesky Institut and Sennaya Ploshchad of the St. Petersburg Metro, the National Antiterrorism Committee (NAC) confirmed.

“The preliminary casualty report on the St. Petersburg Metro blast is nine people killed and over 20 injured, some of them seriously,” the NAC said in a statement. “All the victims are receiving the necessary medical and psychological assistance.”

Images posted on social media show bodies lying next to the damaged car, with blood apparently spilt on a bench.

Health Minister Veronika Skvortsova said there were 47 victims of the blast and gave the number of fatalities as 10. She said six people treated in St. Petersburg hospitals for injuries sustained in the incident remain in a critical condition.

Russia’s Investigative Committee praised the driver of the train for not trying to stop in the tunnel after the explosion.

“He acted right in the circumstances. The explosion happened in the tunnel between stations, but the driver took the right decision and brought it to the next station, which allowed evacuation and help to the injured to start at once. This may have prevented casualties,” the committee said.

Russian President Vladimir Putin said that “the causes of this event have not been determined yet, so it’s too early to talk about (possible causes). The investigation will show. Certainly, we will consider all possibilities: common, criminal, but first of all of a terrorist nature.”

All Metro stations were closed for passengers. Commuters were evacuated from the subway within about an hour of the first reports of the blast coming in.

An undetonated improvised explosive device (IED) was discovered by investigators at the Ploshchad Vosstaniya station and defused by specialists, the NAC reported. It rejected media reports which claimed that more explosions than one occurred, saying no evidence supporting this was found.

Alleged photos of the IED surfaced on social media. They show a medium-sized leather bag, which apparently held a container filled with explosives, with ball bearings wrapped around it.

Facebook has activated its Safety Check feature for users in St Petersburg. It allows people to let friends and family know that they are OK during a disaster or dangerous situation.