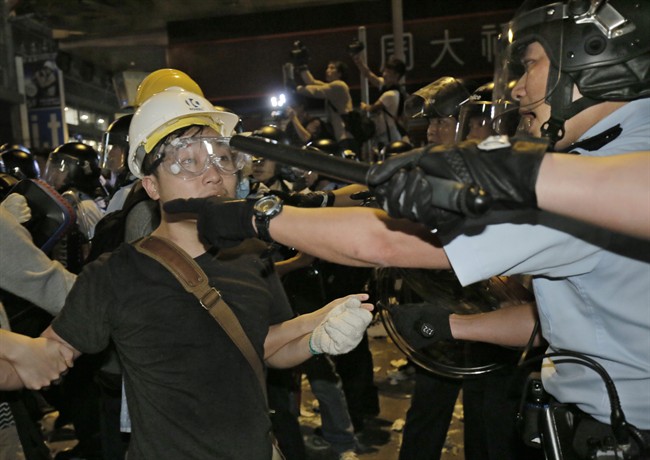 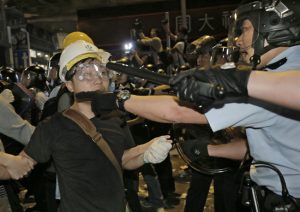 Hong Kong: At least 116 pro-democracy protesters, including several of the movement’s leaders, were arrested Wednesday after police cleared one of the three main downtown demonstration sites in Hong Kong.

In response, the protesters threatened to step up their campaign for greater democratic freedoms such as the right to vote for candidates for office whose names are not on a list of pre-approved politicians.

The police operation took place over two days and ended Wednesday with the removal of all barricades from the Mong Kok district, the most sensitive area overrun by the protesters.

Decisively, but without resorting to violence, police advanced towards the occupiers, forcing them to retreat along Nathan Street, a part of which had been occupied by the pro-democracy campaigners since Sep 28.

In less than three hours, the police managed to remove the obstacles from the street, clean up and restore the flow of traffic, while a small group of protesters huddled in one of the intersections of the road.

The Hong Kong Supreme Court authorised police to remove the barricades set up by the protesters, who for the past two months have been demanding the right to directly choose candidates in the 2017 municipal elections.

The ruling came as the result of a lawsuit filed by two associations of taxi drivers and a bus company, which claimed their businesses were suffering on account of traffic being cut off in the area.

Two of the most visible faces of the pro-democracy protests in Hong Kong, student leaders Joshua Wong and Lester Shum, were arrested Wednesday morning during the police operation.

They were charged with contempt of court and obstructing public officials and are expected to spend the night in prison before being arraigned in court Thursday morning.

Meanwhile, protesters continue to occupy a large area of the Admiralty district blocking roads as well as a small space in the dense commercial district of Causeway Bay, but it was not immediately clear if police have been ordered to evict both of those areas as well.

A spokesperson for the Chinese foreign ministry, Hua Chunying, said in Beijing that the government supports the Hong Kong executive’s move as entirely lawful, pointing out that the student-led movement is illegal and would not be tolerated by any government.

Civil unrest began in late September, after the Beijing government made public its plan for electoral reform in Hong Kong, where the selection of candidates for the 2017 elections was placed in the hands of a select committee of 1,200 members.