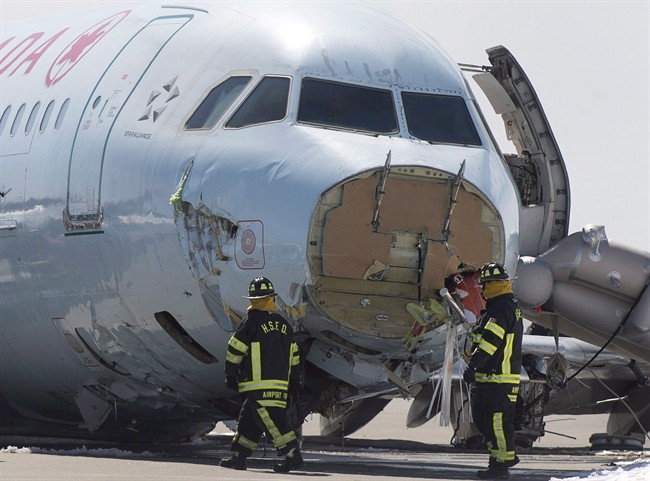 By Aly Thomson, THE CANADIAN PRESS
HALIFAX: A class-action lawsuit has been filed over last month’s plane crash at the Halifax airport, alleging that passengers suffered physical and psychological injuries as a result, a law firm said Tuesday.
The statement of claim from MacGillivray Injury and Insurance Law names Air Canada, Nav Canada, the Halifax International Airport Authority and an unnamed captain and first officer as defendants.
It seeks $12 million in damages for physical and psychological injuries including anxiety, depression, post-traumatic stress disorder and insomnia that it alleges stem from the March 29 crash.
“These injuries and impairments have been accompanied by pain, suffering, and a loss of enjoyment of life,” says the document filed with the Nova Scotia Supreme Court.
None of the allegations contained in the lawsuit have been proven in court.
Air Canada, the Halifax International Airport Authority and Nav Canada all said they could not comment Tuesday as the matter is before the courts.
The lawsuit makes a number of claims including that the airport kept the runway open when it knew or should have known that was not reasonably safe and that the runway was operating with an inadequate instrument landing system.
It alleges Nav Canada instructed the flight crew of Air Canada Flight 624 to land when it knew or should have known that conditions were unsafe and that it failed to advise the flight crew that the aircraft’s speed, rate and angle of descent would result in a crash.
The document also alleges that Air Canada failed to ensure passengers were reasonably safe and that the captain and officer failed to take reasonable care to avoid the crash.
The Airbus A320 was flying from Toronto when it hit an antenna array, slammed into the ground about 335 metres short of the runway and then skidded for another 335 metres before stopping.
All 133 passengers and five crew on board survived, although about two dozen people were sent to hospital.
The statement of claim says after the plane was evacuated, the passengers were left standing on the runway in the cold, wind and snow for about 50 minutes before being picked up by airport officials.
The Transportation Safety Board is investigating.
MacGillivray Injury and Insurance Law said it is also filing a lawsuit that names 20 individual clients in case the class-action is not certified.