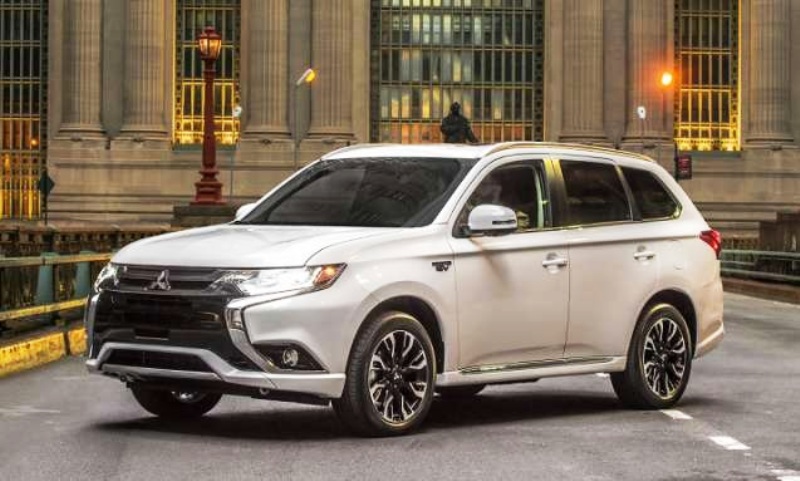 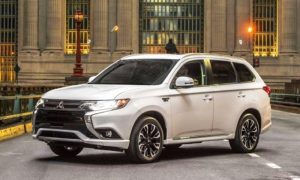 An interesting fact is the five-seat Mitsubishi Outlander PHEV (plug-in hybrid electric vehicle) is actually the world’s best-selling plug-in compact hybrid. It has been on sale for a few years in Europe, and now, finally makes it way to Canada, The PHEV version is differentiated from the standard Outlander by unique badges and exterior trim pieces, and has a different drive shifter. Apart from the powertrain, the PHEV is essentially the same as the standard Outlander inside with special instrumentation for monitoring the hybrid system.

The Outlander PHEV is powered by three power units: a 2.0-litre gasoline engine, two electric motors and a battery/generator. The gasoline engine develops 117 horsepower and 137 pound-feet of torque, and is teamed up with 80 horsepower electric motor that produces 101 lb.-ft. of torque. This combined unit drives the front wheels via a transaxle through a single-speed transmission. The second electric motor also develops 80 horsepower and 144-lb.-ft. of torque, and is linked to the rear wheels through a single-speed transaxle. Meanwhile, a lithium-ion battery, stores and supplies the electric power. 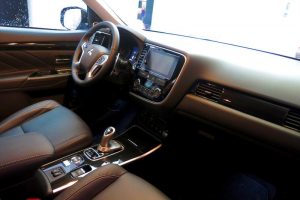 With a fully charged battery, the PHEV can cruise up to 35 kilometres on electric-only driving, before it switches over the gasoline engine. Using a 220-volt outlet, the Outlander takes 2.5 hours to fully recharge via it’s on board external charging port. Outlander PHEV drivers can also monitor the Outlander PHEV’s battery status through a special phone app that can display parameters such as: battery charge condition, time to full charge, and another vehicle status. For the PHEV there is only a two-row, five-seat layout, but as a plus, the PHEV actually has a little more cargo space than the gasoline engined version. The Outlander PHEV offers a fuel economy figure of electric equivalent of 3.0/3.4/3.2Le/100 km city/highway/combined,

For Canada, there are two basic trims models, both All-Wheel Drive, — the SE S-AWC and GT S-AWC, with an available Touring package on the SE. The base Outlander PHEVs, the SE S-AWC model, arrives with blind-spot monitoring with rear cross-traffic alert, while the fully loaded GT S-AWC version adds forward collision avoidance with automatic braking and pedestrian detection, adaptive cruise control, lane-departure warning, a multi-view camera and automatic high beam headlights. The Outlander cabin features a roomy, well finished interior with comfortable seats. Versatility remains with a folding back seat and a cargo capacity of 861 litres behind rear seat and 2,209 litres with the rear seat folded. The battery and its hardware all live under the floor, so trunk space is not compromised.

On the road, the Outlander PHEV offers three distinctly different drive modes. EV, which is the default mode, and allows the Outlander PHEV to drive on electric mode alone until it reaches around 35 kilometers of range, and then permits the gasoline engine to kick in. In Series mode the PHEV is uses electricity, but the gas engine also powers the generator to produce battery electric power. Parallel mode primarily uses the gasoline engine to drive the Outlander PHEV with the electric motors entering when the computer deem it to be more economical. This happens usually at higher speed speeds. On the road, the transition between the different modes is incredibly seamless – I would say the smoothest of all the hybrids I have tested so far. Mitsubishi has developed an awful lot of technology for the PHEV. For example, there are also three driver-selectable modes. EV Priority uses the battery charge until it is virtually depleted. Battery Charge mode can add 80 per cent charge into the battery in just 40 minutes. While the Battery Save mode helps save battery power for short cycle urban driving where it is more effective. The Outlander also takes hybrids regenerative braking system to the next level with a paddle shifter operated six stage driver selectable mode to maximise braking energy ability. The Outlander has impeccable road manners courtesy of Mitsubishi’s excellent S-AWC- (Super-All-Wheel-Control. The Mitsubishi Outlander PHEV, has a starting base price of $42,998 for the SE S-AWC, with $45,998 for the GT S-AWC. Of course the price drops as there are provincial rebates for hybrid vehicle in some provinces— ranging from $2,500 in B.C., to over $9,000 in Ontario. Mitsubishi has one of the best warrantees in the business with even the battery covered under the excellent 10-year, 160,000-kilometre powertrain warranty. The new Outlander PHEV is mighty impressive and well worth considering if fuel economy is must. Top marks and highly recommended.