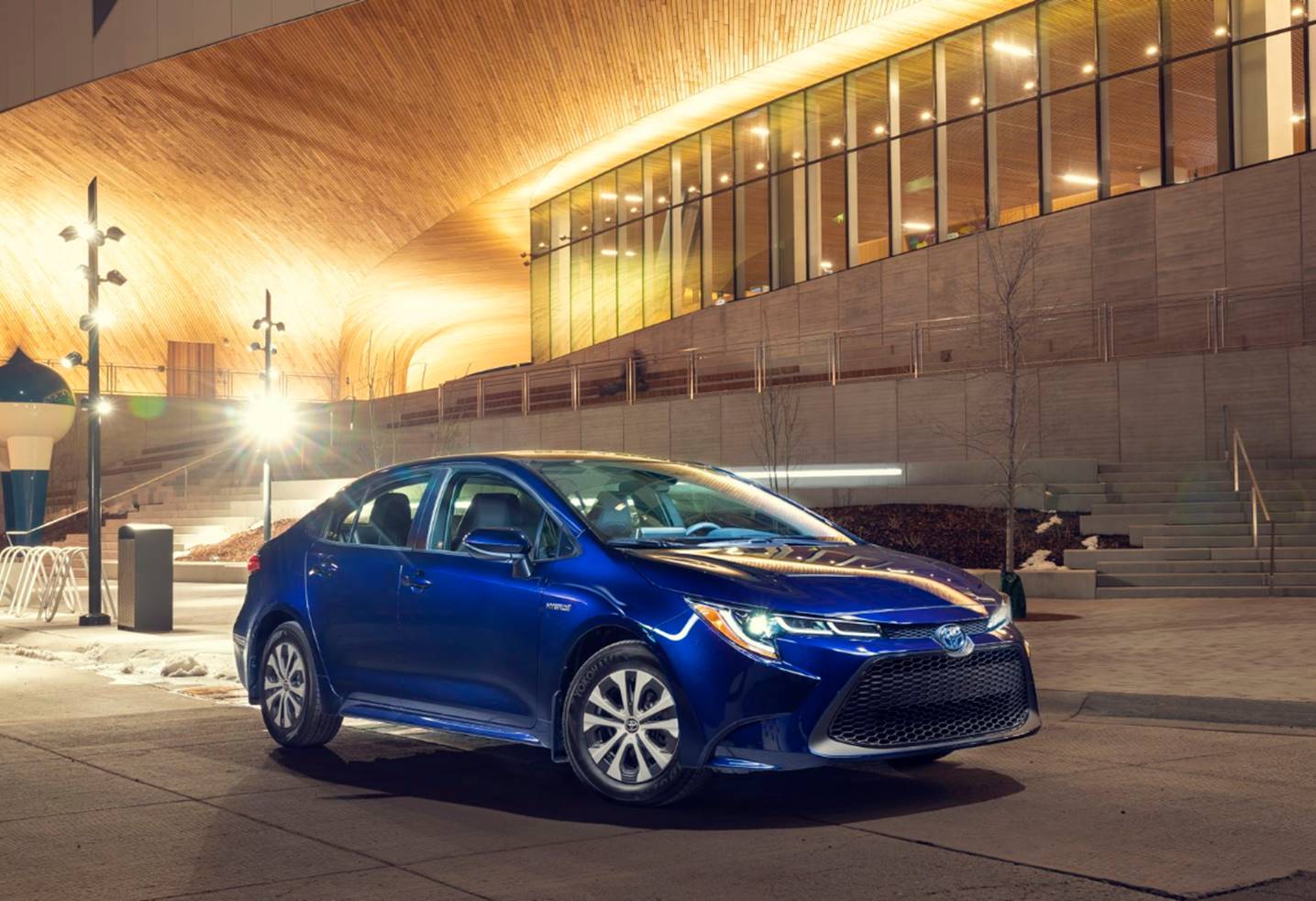 The 2021 Toyota Corolla Hybrid sedan does not wear its green credential as openly as some hybrids. Now fancy, swoopy- looking exterior, just a clean four door sedan that is handsomely styled and contemporary. The Corolla Hybrid looks like a regular Corolla with just a few discreet hybrid badges. The lower grille is a trimmed out with black mesh and there is LED lighting front and rear. To save fuel, and improve rolling resistance there are smaller fifteen inch wheels. New for 2021 is blind-spot monitoring with cross-traffic alert as standard equipment, along with lane-departure assist, automatic high-beam headlights. In addition, there is also: full-speed adaptive cruise control, and emergency front braking with pedestrian and cyclist detection, along with the rearview camera that’s mandatory on all new vehicles. For 2021, Android Auto has been added to join Apple Carplay. Toyota has recently upped the warranty on the hybrid battery – and it’s now covered for 10 years or 240,000 km. Hybrid-related components are covered for eight years or 160,000 km. Also note, the Corolla is not a Plug in Hybrid (OHEV) you can charge externally. The battery charges through the cars onboard regenerative braking system. In term of fuel economy, the Corolla hybrid is amongst the best in class, rated at 4.4 L/100 km in the city, 4.5 on the highway, and 4.5 L/100 km combined.
The Corolla Hybrid comes in two well equipped trim lines starting at MSRP: $24,990) featuring a display audio system with 8” touch screen, Apple CarPlay™ and Android Auto™ connectivity, a 7” digital speedometer, 15” alloy wheels, automatic air conditioning, heated front seats, premium cloth seat cladding, and the Toyota Smart Key System with Push Button Start.
The 2021 Toyota Corolla Hybrid with Premium Package as tested was priced at MSRP: $26,990. And adds upgrades such as heated front and rear seats, SofTex Leather seat surfaces, an eight-way power-adjustable driver’s seat, a leather-wrapped heated steering wheel, ambient cabin lighting, and the Qi wireless charging system for personal electronics.
In term of the hybrid power train, the Corolla Hybrid has a 1.8L Atkinson cycle four-cylinder gasoline engine with two motor/generators and an electronically controlled continuously variable transmission. The gas engine is mated to a 53-kW electric motor, and with a lithium-ion battery pack. Solo – the engine produces 95 hp and 105 lb-ft of torque, and when combined with the electric motor you get a combined maximum 121 horsepower.
The Corolla Hybrid is offers a roomy, neat, attractive functional cabin; interior, material, fit and finish are as usual top class. The dash controls are simple with sensible buttons and dials for controls such as temperature, stereo volume, and tuning, the heated seats and heated steering wheel are also operated by buttons. The front seats are roomy and comfortable. Moving to the rear; well, it’s a bit cramped back there with compromised little leg room – front occupants will have to scoot up a bit to give rear sitting taller adults some space. Still, the rear seats do provide decent two adult seating and the seats do fold down. Total cargo space is 371 L
On the safety front, there is Toyota’s Safety Sense 2.0 package, which includes: adaptive cruise control, lane-keep assist, and automatic high-beams, and mandatory rear-view camera. The 2020 model received the highest five-star rating from the United States National Highway Traffic Safety Administration (NHTSA), as well as a Top Safety Pick award from the Insurance Institute for Highway Safety (IIHS).
On the road, 121 Horsepower may not sound a lot, but it is enough to scoot the Corolla off with impressive acceleration and safe passing on the highway. Power goes to the front wheels through an automatic continuously variable transmission (CVT) that s amongst the smoothest, least obtrusive systems I have experienced. There is an EV mode for better fuel economy and a the B (for brake) setting on the shifter increases the rate of electric regeneration,
In term of fuel economy, the Corolla hybrid with the CVT is rated at 4.4 L/100 km in the city, 4.5 on the highway, and 4.5 L/100 km combined. To sum up, the Corolla is very impressive, I like the neat exterior styling, the nice, comfortable interior, and the decent –equipment levels Of course, the Toyota Corolla’s reliability and resale is legendary and so the Corolla is a no brainer if you want value for money When compared with competition the Corolla Hybrid looks like One of the best deals out there. I would the recommend adding the Premium package for those cold Canadian winters as a little icing on the cake!