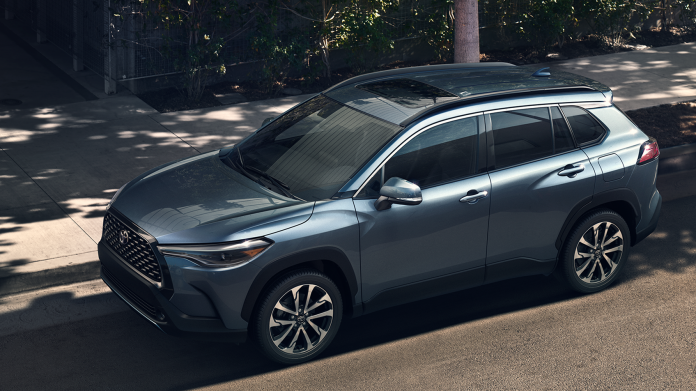 It’s been a long time coming and much awaited, the new Toyota Corolla Cross is a five-door crossover version of the trusty Corolla this interesting new addition sits taller, higher up and boxier than the Corolla sedan or hatchback, the Corolla Cross actually shares the sedans platform, but there are more differences. The exterior looks completely unique for starters, with a boxy rugged look and design cues featuring plastic appliques to the lower body sides and rear bumper. The Cross rides higher with 208 mm (8.2 inches) of ground clearance and is available in an all-wheel drive version.
Interior wise, there is more room and versatility than the Corolla sedan and hatchback. The cabin design is smart, modern, and unique from the rest of the Corolla lineup with an available two-tone colour scheme.
The Corolla Cross is powered by a 2.0L 4-cylinder engine delivering 169 hp in conjunction with a continuously variable transmission (CVT); and with an optional e AWD system that powers the four wheels and can automatically transfer up to 50 per cent of power to the rear. The AWD version also features independent rear suspension instead of the of the FWD’s semi-independent torsion-beam system.
In terms of models and pricing, the 2022 Corolla Cross has a starting price of $24,890 for the base L model, which includes the Toyota Safety Sense suite of safety systems. The range continues with: LE, LE Premium and XLE trims. All-wheel drive is a $1,400 option on the first two and is included standard on Premium and XLE versions. The entry-level L trim has heated front seats, a seven-inch touchscreen infotainment system with Apple CarPlay and Android Auto connectivity, power windows and locks, air conditioning, and heated door mirrors among others standard features.
The LE adds alloy wheels, tinted windows, automatic climate control, a heated steering wheel, an eight-inch touchscreen, and two USB ports on the rear of the centre console. The top XLE Model as tested ($33,990) adds: roof rails, a power sunroof, wireless phone charger. a nine-speaker stereo, satellite radio, dual-zone automatic climate control, synthetic leather upholstery, a power-adjustable driver’s seat, a height-programmable power tailgate, and larger 18-inch alloy wheels, as well as standard All-Wheel Drive.

The interior features a neat cabin with well-designed ergonomics and controls. The driver’s seat is supportive, and its a typically comfortable, high- quality Toyota interior. Front seats are heated, but no heated rear seats are available. There’s less rear legroom than the Corolla sedan, but the back seat is roomier. Rear cargo space with all seats up is 722 L and reduces to 688 L in the AWD version. However, one nice touch is the 60/40 rear seats fold virtually flat with the load floor, with 1,900 L of total space with the rear seats down.
As with all Toyota’s safety features are good, with forward collision warning with pedestrian and cyclist detection, as well as automatic emergency braking, lane-departure warning and following assistance, automatic high-beam headlights, and adaptive cruise control that works in stop-and-go traffic. The XLE trim also adds low-speed reverse automatic braking.
On the road, with 169 hp and 151 lb-ft of torque, the Cross won’t win the stoplight Grand Prix! with the CVT’s somewhat sluggish acceleration on hard starts as the engine exerts itself moving the weight of the AWD system and mass of this crossover. More power would not go amiss here! The continuously variable transmission (CVT) is not the quickest transmission , a common issue with the CVT format. Despite the underwhelming acceleration, the Corolla Cross is a capable, comfortable cruiser once it gets going and performs well on the highway. The All-Wheel Drive system automatically distributes torque according to road conditions. The system works very well and the AWD system handles a variety of road conditions with different levels of grip. Overall ride quality is good, and the Toyota Corolla Cross excellent handling, comfort, and composure. Fuel economy, is also good, with the AWD variant delivering a combined rating of 7.8L/100 km. Meanwhile a new hybrid version is expected for the 2023 model-year.
To sum up, although a very capable vehicle, the Cross is expensive compared to the rest of the Corolla family of sedans and hatch backs that arrive with optional equipment and luxury options, and even hybrid versions for a lower price point even when fully loaded. True, the top two-tier Cross levels do include All-Wheel Drive for the price if that is must- have feature. Key advantages include: AWD, the increased ground clearance and improved, bigger interior dimensions. Other highlights include the good looks, impressive passenger and cargo space, versatile practicality, and fairly good fuel economy figures. Finally, and of course, there are the tried and trusted Corolla bones. A good buy all around and recommended.