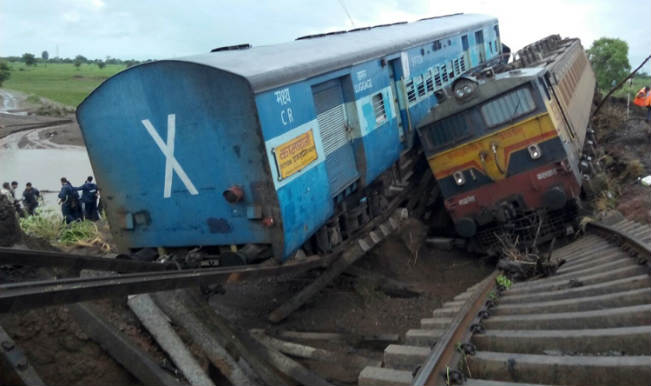 Harda (Madhya Pradesh), Aug 5 (IANS) In a first of its kind disaster, 27 people were killed as two trains derailed within 15 minutes near a bridge here in Madhya Pradesh, sending 21 coaches plunging into the rain-swollen Machak river, officials and witnesses said.
Around 70 people were injured, some reportedly seriously, following the twin accident close to midnight Tuesday.
The Madhya Pradesh government put the death toll at 27. In New Delhi, however, the Indian Railway spokesperson said only 12 passengers died and 25 were injured.
He said the state government was also taking into account more than a dozen bodies found a little distance away from the accident site and those “people may or may not be our passengers”.
One of the trains was the Varanasi-bound Kamayani Express which derailed at about 11.20 p.m. Less than 15 minutes later, the Mumbai-bound Janata Express on the parallel track also met the same fate – at that very spot.
Desperate passengers screamed in pain and terror as they tried to claw their way out of the mangled coaches. A few managed to come out, bruised and bleeding, but some couldn’t.
Ajay Kumar, 45, a Janata Express passenger going from Bihar to Mumbai, said his wife Kanchan Bai died in the horrific accident.
“There was a huge jolt. I managed to come out of the coach with my daughter. But I saw my wife was still inside the coach which began to fill with water quickly… I saw my wife die.”
Another woman who was warded in the hospital said she was in a coach which suddenly tilted to one side.
“It was really frightening… People tried to go from one coach to another. I have no idea how I escaped. I thank god that I am alive,” she told journalists.
The shaken survivors said they were jolted out of their sleep when their coach fell into the river with a roar.
A Kamayani Express passenger said the first few coaches of the train crossed the river but those after the fourth coach plunged into the water.
“Many of us had to swim out of the coach,” said the visibly rattled man.
The tracks were badly twisted in the disaster. The coaches landed in awkward angles, making the search operation difficult for divers looking for bodies in the river.
The Madhya Pradesh government said the river was in spate and there was soil erosion.
Railway Minister Suresh Prabhu told parliament that monsoon floods, which caused soil erosion, may have caused the accident — by weakening the bridge over the river.
Prime Minister Narendra Modi called the deaths “deeply distressing”, and said he was deeply pained over the loss of lives.
“My prayers with the injured. Authorities are doing everything possible on the ground.”
Suresh Prabhu ordered an inquiry into the derailment and announced compensation to the families of the victims.
He said villagers were assisting in the rescue efforts. He said “everything that’s necessary and possible (was) being done” and he was in constant touch with Madhya Pradesh authorities.
The disaster made the CPI-M appeal to the government to give priority to railway safety over plans to run bullet trains.