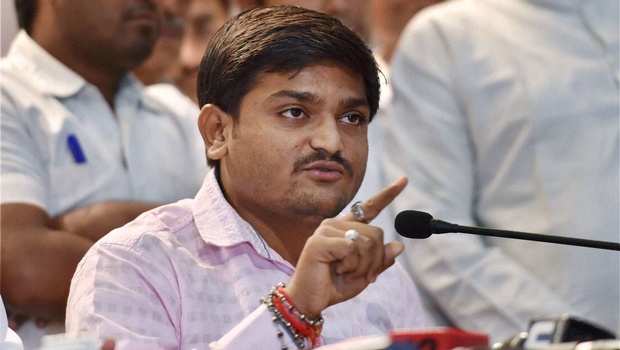 Monday’s voluminous chargesheet contains 42 phone call records between Hardik and his supporters, statements of 503 witnesses and reports of the Forensic Science Laboratory certifying the veracity of the calls.

A 370-page chargesheet was earlier filed in a sedition case against the Patidar Anamat Andalan Samiti convener.

Besides the PAAS convenor, Chirag Patel, Dinesh Patel and Ketan Patel were charged with attempting to wage war against India and sedition under relevant sections of the Indian Penal Code.

His two associates Alpesh Kathiria and Amrish Patel have been declared absconders in the case.

Hardik and 14 other PAAS leaders have been in custody since October 18 last year on various charges.

The state government has announced its intention to withdraw several cases against many Patel agitators and facilitate bail for them, but is yet to spell out its position on the cases against Hardik, especially the sedition cases.

On Sunday, Hardik had expressed willingness for a patch-up with the state government, which replied that it was agreeable if it receives an “official communication” from the Patel leader.

Meanwhile, another quota leader and convenor of the Sardar Patel Group, Laljibhai Patel, on Monday said the Patel community would continue with the agitation.

He threatened that the Patels would boycott all government functions till their demands are met.

“Our demands include that of the Gujarat government clarifying its stand on reservation to Patels, taking back all cases against the Patel agitators, releasing all of them and initiating stern action against errant officials who have tried to crush our agitation,” Laljibhai Patel told reporters.

He said the state government’s position on the issue was misleading.

“On one hand, they are talking of withdrawing cases against the Patel agitators and on the other, they continue to file lengthy chargesheets against our brothers,” he added.

He reiterated that they shall continue with their “non-violent” but “aggressive” agitation.

“More than 25 million Patels across the world will join our movement and if the state government does not listen to our demands, they will have to pay for it in the 2017 assembly elections,” he said.