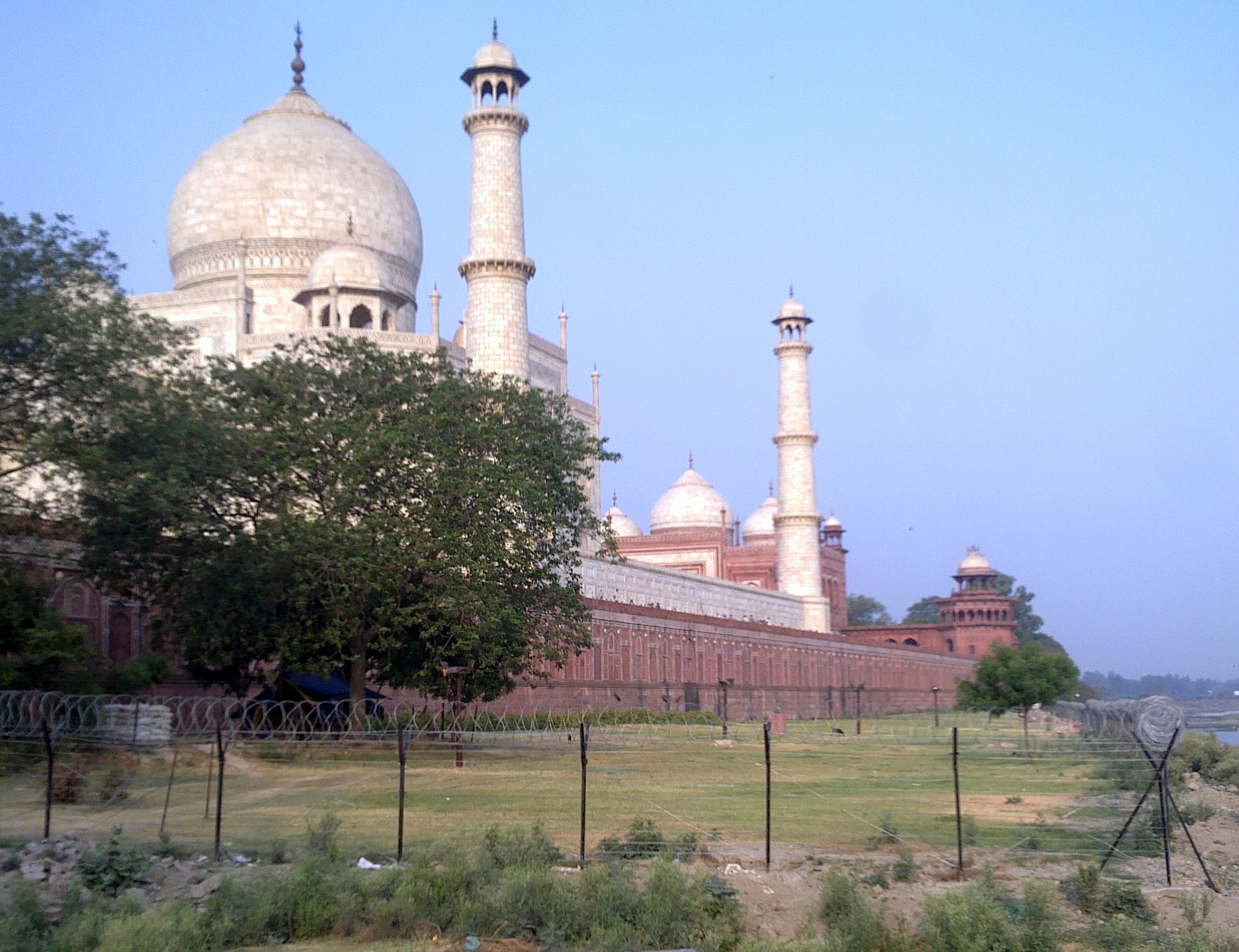 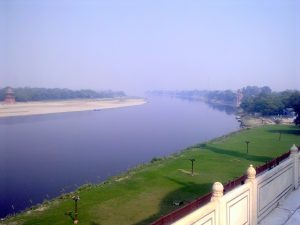 Agra, April 3 (IANS) Most photographs of the Taj Mahal taken before 2003 show the Yamuna river flowing close to the rear foundation of the edifice, its water in fact lapping the rear wall. But now a park developed by the Archaeological Survey of India, no doubt to beautify the area around it, has distanced the Yamuna by a good 100 hundred yards from the world-famous marble maosoleum.
This could prove dangerous for the foundation of the 17th century monument of love, which could tilt or sink, author and eminent historian of the Mughal period R. Nath has warned. The health of Taj’s foundation is dependent on the Yamuna, which should flow full and touch the rear part of the mammoth structure.
Architects and construction workers during the Mughal period and earlier were well aware of the crucial role of water and built many palaces and monuments either in the middle of a water body or on its edge. The Taj Mahal too was sited at this particular location due to the huge water body available at the back.
“Without water in the Yamuna, the physical settings and natural ambience that supported the huge structure have become imbalanced, threatening the safety of the monument,” Nath told IANS on the phone from Ajmer, where he has now shifted.
In its response to an RTI query, the ASI said the park at the back was not in the original plan of the monument but was developed by its horticulture wing for reasons no one is prepared to explain.
The so-called “beauty spot” was developed some years ago by K.K. Mohammed, the then ASI boss in Agra, without seeking clearance from any authority or specialised agency. This has naturally led conservationists and historians to raise their eyebrows and question the wisdom of “creating an artificial divide between the Taj and the Yamuna river which were integrally linked in the original design.”
The mandarins in the ASI say it does not matter whether the river flowed close to the monument or not. Their argument is that they have beautified the riverfront which was earlier an eyesore, with litter thrown all around. Visitors were always throwing all kinds of things from the main platform of the Taj.
“The park has all the potential to endanger the monument. They have created an artificial park that did not exist in the original Taj complex plan. The Yamuna river has been pushed a good distance away, which is not desirable,” Nath pointed out.
“They have not read the 1923 John Marshal Manual. The historicity of any monument can not be altered,” he added. Moreover, the Ancient Monuments Act of 1958 also does not permit changes.
Most conservationists agree that the river should be full of water and touch the foundation on which stands the Taj Mahal.
“In the original design, there was no park. The royal family members used to come to the Taj Mahal in boats and enter the monument from the rear gates. This new addition will definitely stress the monument in unexpected ways,” R.C. Sharma, former head of the history department at St John’s College, told IANS.
“Let them show one picture or drawing of the Taj Mahal (old ones not the latest) which doesn’t have the Yamuna touching the rear wall of the structure,” Surendra Sharma, president of the Braj Mandal Heritage Conservation Society, told IANS.
“In the original Taj plan, as is clear from old photographs of the Taj Mahal, including the 45-odd maps and designs prepared in 1942, the river is seen flowing touching the rear wall. In fact there were two gates leading to the staircases used by the Mughals to climb up the Taj from boats.
“Instead of clearing the debris and bringing the river back to its original status and glory, what they have done is a huge cover up which violaties a Supreme Court directive that clearly stated that there should be no tampering with the physical settings in and around the Taj Mahal,” Surendra Sharma added.
Nath says there’s a big difference between dynamic momentum and deadweight piled up at the foundation of the Taj Mahal at the rear.
“They should have de-silted the whole area and allowed the river to flow on its original course, as the water is absolutely necessary for the structure,” Nath said, adding that the ASI did not consult anyone, nor did it conduct an investigation on the likely repercussions of the new facility on the 356-year-old monument.
“They are playing with the Taj Mahal. It is not conservation,” said Nath.
But ASI officials feel an unnecessary alarm is being raised. “We have no basis to suggest that there should be water in the river or the river should flow touching the foundation of the edifice,” one official argued.