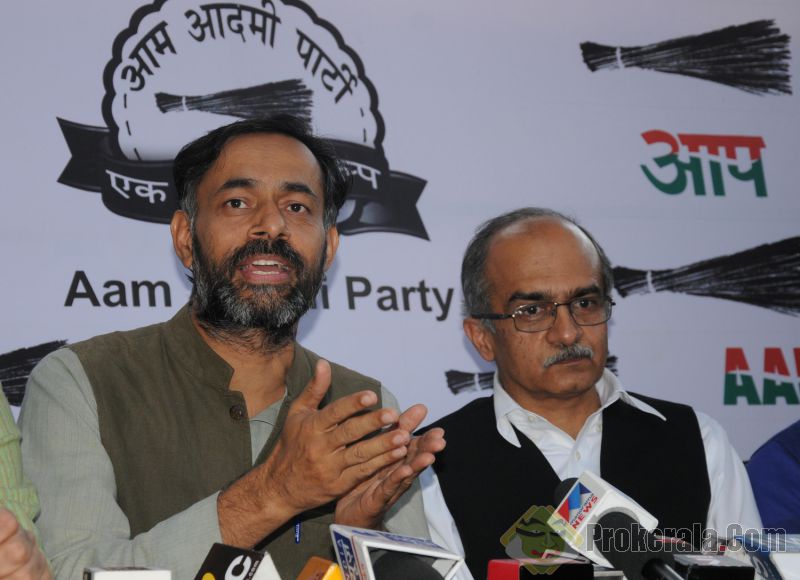 New Delhi, March 5 (IANS) Delhi Chief Minister Arvind Kejriwal’s AAP remained a divided house Thursday, as one party leader alleged that two senior colleagues were dropped from its top decision body though they had offered to step down honourably and another decrying the expose.
Even as Yogendra Yadav, who along with Prashant Bhushan was ousted from the nine-member Political Affairs Committee (PAC) Wednesday night, sounded conciliatory note Thursday, another senior leader, Mayank Gandhi, made public what happened at the National Executive meet here, triggering anger among party volunteers over the ugly leadership tussle.
“I wish to say clearly there was no bargaining in yesterday’s (Wednesday) meeting (of the National Executive),” Yadav told the media here.
“The party has taken a decision, we should not discuss (its) proceedings,” he said, when asked if he (Yadav) and Bhushan had been given or had sought new responsibilities in the Aam Aadmi Party.
Yadav reiterated he would “neither split nor quit” the AAP, India’s youngest party which stormed to power in Delhi last month with a thumping majority.
“It would be presumptuous for Prashantji and me to believe that we were the two conscious keeper of the party. I would like to undermine that this party has thousands of conscience keepers.”
Bhushan, a leading Supreme Court lawyer and an AAP founder member, and Yadav, a political expert, were booted out of the PAC after a nearly six-hour meeting of the National Executive Wednesday on charges of leading a revolt against Kejriwal.
The charge against them was led by loyalists of Kejriwal, who did not attend the meeting as he flew to Bengaluru to begin medical treatment for blood sugar and persistent cough.
Yadav’s comments followed revelations by Mayank Gandhi, convenor of the Maharashtra unit, that Yadav and Bhushan had agreed to come out of the PAC honourably but were ejected by majority vote.
“I am extremely sorry that I am breaking the diktat of not speaking to anyone outside on what transpired at the National Executive meeting,” Gandhi said in his blog. “Generally, I am a disciplined soldier of the party.
“Last night I was told that disciplinary action would be taken against me if I revealed anything. So be it — my first allegiance is to the higher truth,” Gandhi added, giving a gist of what happened at the meeting in New Delhi and urged the AAP to release the minutes of the close-door meeting.
Gandhi said Yadav and Bhushan suggested a reconstitution of the PAC with new members elected through voting in which they would not contest. Second, the PAC could continue in the present form but Yadav and Bhushan would not attend its meetings.
Gandhi said the meeting broke for some time after which Delhi Deputy Chief Minister Manish Sisodia, a Kejriwal confidant, proposed a resolution that Yadav and Bhushan be removed from the PAC. This was seconded by Sanjay Singh, another Kejriwal loyalist.
Gandhi said he abstained from voting along with some others but the majority voted to oust Bhushan and Yadav. He said: “I was taken aback by the resolution of removing them publicly.”
As if in response to Yadav’s media comments and Gandhi’s blog, AAP leader Ashish Khetan, a Kejriwal loyalist, said on Twitter that “some people will keep giving TV interviews, some will work day and night for the country’s development, some write blogs, some will write history.”
An AAP member of the National Executive told IANS: “There was an atmosphere of depression at the meeting Wednesday. The going won’t be easy without them (Bhushan and Yadav).”
Gandhi’s blog received hundreds of responses from AAP volunteers, with many expressing their disgust at the goings on in a party that has claimed to be different from others in India.
Said Shoaib, commenting on his post: “I have been let down (by the AAP). What a tragedy.”
Added Ankur Gupta: “Details given by you (Gandhi) have made thousands of AAP volunteers regret the decision to support AAP.”