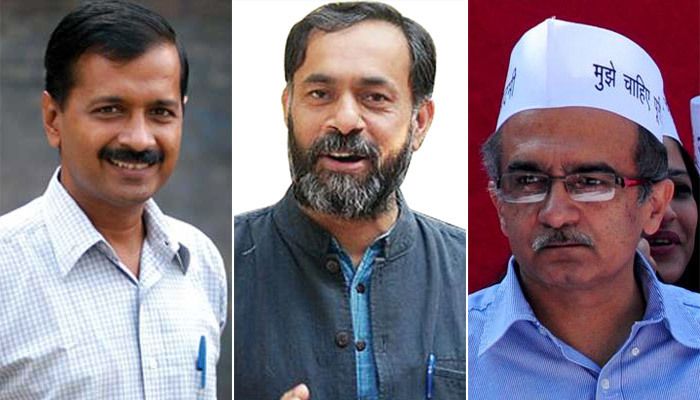 New Delhi, March 26 (IANS) Less than two months after it stormed to power in Delhi, the AAP appeared set for a split with the party saying on Thursday that senior leaders Prashant Bhushan and Yogendra Yadav had quit its national executive and the two men vehemently denying this.
Making the announcement two days before the executive meets here, AAP spokesman Ashish Khetan said Bhushan and Yadav appeared dead set against Delhi Chief Minister Arvind Kejriwal, the party’s best known face who assumed office on February 14.
“They say one thing in private and another in public,” Khetan told the media, adding he had been involved in days of close-door discussions with both men over issues confronting India’s youngest political party.
The comments came two days ahead of the Aam Aadmi Party’s national executive meeting where both sides — the Kejriwal camp and supporters of Bhushan and Yadav — could have had a showdown.
Delhi’s Deputy Chief Minister Manish Sisodia added that close-door talks with Bhushan and Yadav had failed as they were adamant that Kejriwal must go as the party’s all-powerful national convener.
“No effort to remove Kejriwal is acceptable to me,” added Sisodia, a long-time confidant of the chief minister.
“Despite accepting all their demands, they are insisting (on the removal of) AK,” he added, referring to Kejriwal. “In public they say AK is the leader, in private they insist on his removal.”
Another AAP leader, Kumar Vishwas, said all the five proposals of Bhushan and Yadav were accepted by the party but their demand for axing Kejriwal as the national convener would only be decided by the national executive.
In the mounting war of words, Bhushan and Yadav denied the charges made against them. A defiant Bhushan added that Kejriwal wanted only “yes men” around him and not those with independent views.
Both are to hold a press conference on Friday, a development that could generate more heat.
A founder member of the AAP and a leading Supreme Court advocate, Bhushan told the media that it was a lie to say that he and Yadav wanted to see Kejriwal step down as the national convenor.
“This is a lie, we never made this demand,” he said. “All we have asked for is transparency in the party.”
Yadav, a known political expert, agreed and asked Kejriwal loyalists to produce his resignation letter — if he had indeed resigned.
“What is being passed off as ‘resignation letter’ is a note for internal negotiations,” Yadav said in a tweet.
He said it was “ridiculous” to say he and Bhushan demanded Kejriwal’s removal as the national convenor.
“This wasn’t mentioned in our note, never came up for discussion. Can they give any proof?” he asked.
Yadav added: “I hear funny news about the PAC (Political Affairs Committee) accepting our resignation. Will my colleagues please produce a copy of the resignation letter?”
The AAP has been embroiled in an internal tussle after taking power in Delhi last month, with the pro-Kejriwal camp accusing Bhushan and Yadav of trying to oust the chief minister. Both have denied the charge.
Bhushan and Yadav were sacked from the Political Affairs Committee (PAC), the party’s top decision making body, earlier this month in the first open sign that all was not well with the AAP.
That was accompanied by a war of words between Bhushan and Yadav on the one hand and known supporters of Kejriwal on the other.
Once Kejriwal returned to New Delhi after 10 days of naturopathy in Bengaluru, the situation calmed — publicly — but the two factions held a series of close-door discussions to sort out various issues.
From the dramatic developments on Thursday, efforts to bring about a unity between the two groups appear to have fizzled out.