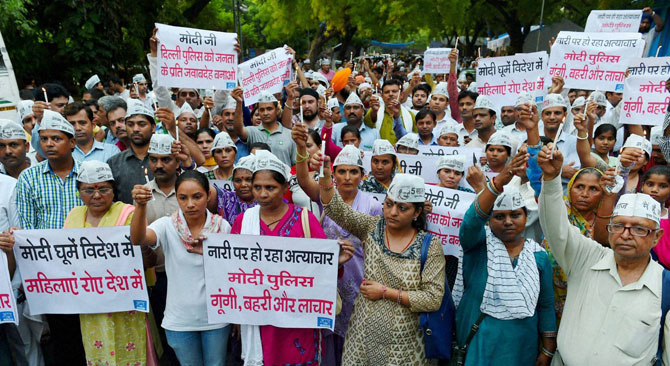 New Delhi, July 21 (IANS) The Aam Aadmi Party (AAP) supporters protesting against Delhi Police outside Anand Parbat police station here on Tuesday were cane-charged.
They were protesting alleged police inaction that led to the murder of a teenaged girl in Anand Parbat area of central Delhi last week. Police resorted to the cane charge to disperse the protesters.
“The protest was getting too violent. We tried to pacify them but they did not agree. We were forced to cane charge to disperse them,” a police officer told IANS.
No one was, however, detained.
“Crime against women is increasing in the city. The victim had earlier complained against the assailants, saying they stalked her. Police did not pay heed to her complaints, which led to her murder,” an AAP supporter said.
“We want the resignation of ACP Patel Nagar and SHO Anand Parbat police station,” he said.
When Delhi Police Commissioner B.S. Bassi was asked about the police inaction as alleged by the AAP supporters, he said: “We are doing our work on the basis of merit and it shall always be on merit. I am thankful to anyone who criticises me.”
Meenakshi, a Class 11 student, was repeatedly stabbed by two neighbours after she objected to their verbal abuse on July 16.
Meanwhile, Deputy Chief Minister Manish Sisodia said on Tuesday that a day-long special session of the Delhi assembly will be held on July 28 to set up a commission of inquiry into cases of crimes against women in the national capital.
“We have decided to propose the setting up of a commission of inquiry to look into crimes against women,” he said.
Sisodia told reporters that the commission would work on a five-point agenda advocating appropriate action in cases of crime against women. The panel would also discuss whether the Criminal Procedure Code could be amended.
The commission would seek action against police officials for negligence and support speedy trial of such cases and implementation of the recommendations of the Justice Verma Committee, he added.
The Justice Verma Committee had recommended amendments to the criminal law for quicker trial and favoured enhancing punishment in sexual assault cases.
“Women are being stalked in the capital. The murder of a teenaged girl was an unfortunate incident,” he added.
The brutal stabbing of the 19-year-old girl in Anand Parbat has again brought the issue of women’s safety into focus, pitting the Arvind Kejriwal government against Delhi Police.
The Delhi government has accused police — which do not report to it — of callousness in probing the murder.
The ruling AAP on Tuesday alleged laxity on the part of Delhi Police in investigating the murder case.
Party spokesperson Dilip Pandey asked why were police naming just one of the accused in their report while three people were involved in the case.
“The FIR has name of just one accused. Why have the police not named the second accused in the case and their mother? Is the police hiding something?” said Pandey.
The party also reiterated its demand to hand over the administrative control over Delhi Police to the state government.