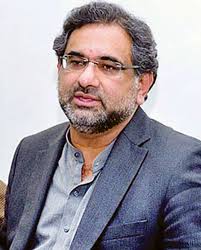 Islamabad: The cabinet of new Prime Minister Shahid Khaqan Abbasi on Friday saw the return of old faces, but a major change in portfolios was seen, with most notable being the induction of ex-Defence Minister Khawaja Asif as Foreign Minister.

Sartaj Aziz was serving as the de facto Foreign Minister in the Nawaz Sharif government, as he was Special Advisor to Prime Minister on Foreign Affairs.

The new cabinet of Khaqan Abbasi was sworn in at the Presidency.

Nisar Khan has refused to be part of the new government.

PML-N’s information secretary Mushahidullah Khan was appointed as the Minister of Climate Change.

The anxiously-awaited oath-taking ceremony earlier saw an unexpected postponement on Wednesday after the ruling PML-N’s top leaders could not finalise the candidates to be inducted as cabinet members.

The PML-N top leadership had been holding marathon huddles during the past many days. Besides finalising Abbasi’s cabinet, the party leadership has been having brainstorming sessions to devise the future course of action.

Sources in the party say the Shahbaz Sharif is reluctant to leave Punjab – the province he has been governing since 2008 with an iron grip. Close circles of Shahbaz claim that the Chief Minister feels his continuation in Punjab is important given the next General Elections are less than a year away.

The federal cabinet was dissolved after Nawaz Sharif stepped down following a landmark Supreme Court ruling on the Panama Papers case.

The court in its July 28 verdict unseated Sharif from holding the post of Prime Minister.