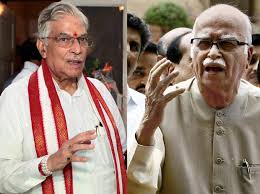 New Delhi, Nov 10 (IANS) Two days after the BJP was routed in Bihar, the party’s old guard including L.K. Advani on Tuesday took on Prime Minister Narendra Modi and BJP president Amit Shah, demanding “a thorough review” of the debacle but said it can’t be done by those who were responsible.

In a virtual challenge to Modi’s leadership who became the prime minister in May 2014, former party presidents Advani and Murli Manohar Joshi, former union minister Yashwant Sinha and former Himachal Pradesh chief minister Shanta Kumar said the Bihar defeat showed that the BJP had learnt nothing from its crushing defeat by the AAP in Delhi in February.

“To say that everyone is responsible for the defeat in Bihar is to ensure that no one is held responsible,” said the brief hard-hitting statement signed by Sinha on behalf of the four leaders.

“It shows that those who would have appropriated credit if the party had won are bent on shrugging off responsibility for the disastrous showing in Bihar,” it said, in a clear reference to Modi and Shah who were the BJP’s faces vis-a-vis the Grand Alliance of Chief Minister Nitish Kumar.

The statement followed a meeting of the leaders at Advani’s residence and then at Joshi’s where former central minister Arun Shourie, who has blamed Modi, Shah and Finance Minister Arun Jaitley for the Bihar defeat, was also present along with former BJP ideologue K.N. Govindacharya.

“The result of the Bihar election shows that no lesson was learnt from the fiasco in Delhi,” the statement said.

Advani and the others said that a review of the Bihar rout — where the Bharatiya Janata Party won just 53 of the 243 assembly seats — “must not be done by the very persons who have managed and who have been responsible for the campaigning in Bihar”.

In an obvious reference to Modi and his confidant Shah, it said “a thorough review must be done of the reasons for the defeat as well as the way the party is being forced to kowtow to a handful and how its consensual character has been destroyed”.

The statement said the principal reason for the party’s defeat in Bihar “is how the party has been emasculated in the last year”.

The statement came hours after Home Minister Rajnath Singh — a la Jaitley on Monday — said that Modi and RSS chief Mohan Bhagwat were not to blame for the disaster in Bihar where the JD-U, RJD and Congress won a whopping 178 seats.

“The prime minister can’t be blamed for the defeat in Bihar,” Rajnath Singh said. “It is the BJP’s and NDA’s electoral loss, not the PM’s as a leader.”

Jaitley had expressed similar views a day earlier, adding that there was no question of removing Shah as the BJP president because he had led the party to victories in other states after the Lok Sabha battle.

But voices of discontent have been steadily mounting in the BJP since the Bihar results came out on Sunday.

On Tuesday, Bhola Singh became the fifth BJP MP to blame Modi for the defeat.

The Begusarai MP said the rampant use of “unparliamentary language” by Modi and other party leaders during the election campaign harmed the BJP, leading to its defeat.

“There was no logic to raise issues such as beef and that firecrackers would be burst in Pakistan if the BJP loses,” he said. “All these resulted in our defeat.”

Advani, credited with building the BJP since it was left with just two Lok Sabha seats in 1984, has been mostly sidelined since Modi took charge of the party’s campaign committee and, later, the government.

But those affected by Modi’s style of functioning continue to look upon him as their mentor.

There was no formal reaction from the party to the old guard, who enjoyed senior posts before Modi took the national stage.

But BJP spokesman Nalin Kohli told CNN-IBN that a review of the Bihar result was already on and the party would respond to Advani and others if needed.