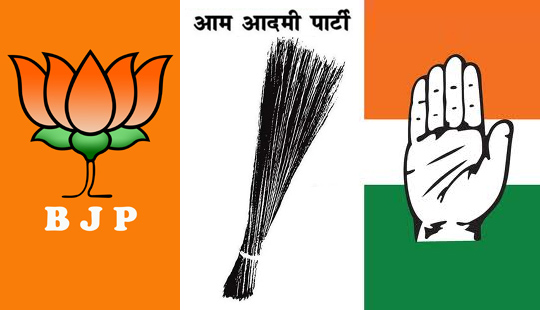 New Delhi: The stage is set for counting of votes on Saturday to wrap up a staggered poll process in five states – the biggest electoral contest ahead of the 2019 general elections — in what is largely seen as a referendum on Prime Minister Narendra Modis demonetisation move.

According to the Election Commission of India, the early trends will start pouring in from 8 a.m. for all the five states – Uttar Pradesh, Uttarakhand, Punjab, Manipur and Goa – where thousands of central forces have been deployed at vote counting centres.

Stakes in Uttar Pradesh, politically the most significant state in India, are high not only for the Bharatiya Janata Party (BJP) but also for the Samajwadi Party-Congress alliance.

The Congress is also eying power in Punjab and Goa and hopes to retain Uttarakhand and Manipur.

The fledgling Aam Aadmi Party (AAP) is also hoping to form governments in Goa and Punjab — which would mark its first electoral success outside Delhi.

The poll panel has set up 78 counting centres across 75 districts in Uttar Pradesh which has a 403-member assembly.

Exit polls have predicted a hung Uttar Pradesh assembly with a possibility of the BJP emerging as the single largest party. It has also been predicted to be at top in Uttarakhand and Goa.

Any electoral success, especially in Uttar Pradesh, will boost the BJP and reaffirm Prime Minster Narendra Modi’s popularity and bold decision of spiking high value notes of Rs 500 and Rs 1,000 that caused an unprecedented currency crunch in the country.

In Uttarakhand, the poll panel has set 15 counting centres.

Chief Minister Harish Rawat, who faced an all-round attack from the BJP and many of his old associates who switched to the saffron camp ahead of the polls in February, exuded confidence of winning the elections again.

“Based on the work done by the Congress government, we are going to form the government again,” Rawat said.

Rawat predicted a “minimum of 45 seats” for the Congress in the 70-member house.

The opposition BJP, which got 31 seats against 32 for Congress in the 2012 elections, is enthusiastic about its performance.

In Punjab, votes will be counted at 54 centres.

Exit polls by various news channels and survey agencies have indicated a rout for the Akali Dal-Bharatiya Janata Party (BJP) alliance in Punjab, with most projecting single-digit seats for the ruling combine.

While some surveys put the Congress and AAP in a neck-and-neck finish, one survey each gave a clear majority to the AAP and the Congress respectively.

In Goa, votes will be counted at two centres in North and South Goa to declare the winners in 40 seats.

A majority of exit polls projections said the ruling BJP will emerge the winner or as single-largest party in the state assembly.

In Manipur, counting of votes will be held for 60 seats.

In the Congress-ruled state, the BJP is expected to win 25 to 35 in the 60-member house, according to exit vote surveys. The Congress may finish second with 17 to 25 seats.