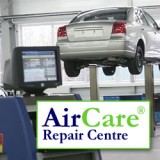 Vancouver: As of Dec. 31, 2014, the Aircare program will end for all light-duty passenger cars and trucks in Metro Vancouver.
Great progress has been made in reducing air pollution from light-duty vehicles, in part, because newer vehicles are designed to meet more stringent emission standards. Technological advances in the emissions reduction capability of new vehicles also continues to increase.
Since the program began in 1992, emissions from light-duty vehicles have decreased 89% from 149,300 tonnes to an estimated 16,500 tonnes for 2014.
Since 2007, both the AirCare failure rate and the number of vehicles failing have steadily dropped – from 14% (58,776 vehicles) to less than 8% (34,439 vehicles) as of November 2014.
The Province appreciates the work of the AirCare staff throughout the delivery of this program, and recognizes the contribution they have made in improving air quality in the region.

Three Russians jailed for stabbing and then burning ‘gay man

Say anything John not telling truth about eliminating road tolls

Most Canadians comfortable with pace of easing restrictions: poll