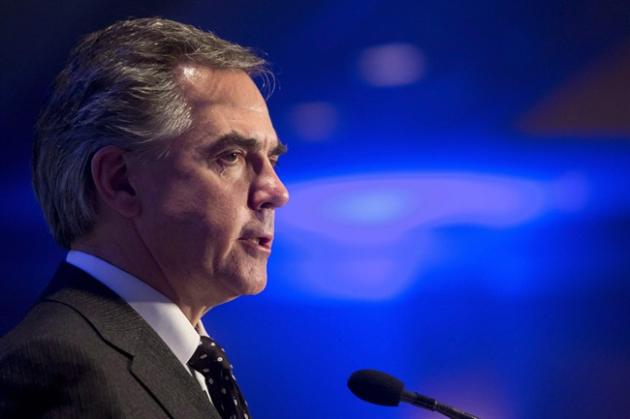 By Dean Bennett, THE CANADIAN PRESS

EDMONTON: Premier Jim Prentice says he and his cabinet ministers will cut their pay by five per cent to set a tone of self-sacrifice as Alberta deals with billions of dollars in lost oil revenue.

“This is the kind of leadership that Albertans expect from their elected officials in these challenging times,” Prentice told a news conference at the legislature Thursday.

Prentice said the reduction will kick in Sunday.

The premier said he will ask his whip George VanderBurg to bring forward a motion next week to the legislature committee that handles pay to pass a similar measure for government backbenchers and opposition members.

He said the five per cent was selected because it was “a reasonable number.”

Prentice signalled last week that reductions were coming from his team as he crafts a financial plan to be presented next month that he says will fundamentally restructure Alberta’s economic model with an eye to getting off the roller coaster of volatile oil resource revenues.

Oil prices have plunged from more than US$100 a barrel last summer to less than $50 a barrel today, siphoning billions of dollars from the treasury.

Prentice has said many ideas are on the table, including a sales tax and changing the 10 per cent flat on income. He has ruled out changing oil royalties, which critics have said are too low.

He has also said he will talk to the public sector unions given that they are, on average, the highest paid in Canada.

Prentice was asked if Thursday’s announcement was to pave the way to asking the unions for a similar five per cent cut.

“Discussions with the public service have begun (but) we have not put specific measures on the table,” said Prentice.

He said the pay for deputy ministers and other senior civil service bureaucrats are also in play.

“The discussions will involve everyone who is paid by the citizens of Alberta,” he said.

“Today’s announcement amounts to window dressing. It does not go near far enough to achieve savings or signal a change in culture,” Forsyth said in a news release.

“MLA wages should also immediately be rolled back by a full eight per cent to where they were before the PCs rewarded themselves with an extra $11,000 in the fall of 2012,” she said.

She said cabinet pay should be cut by 30 per cent and adjusted for inflation to 2008 levels.

Gil McGowan, president of the Alberta Federation of Labour, took to social media to condemn Prentice’s announcement as cynical bargaining.

“Prentice (is) setting up for (an) attack on public sector wages, even though MLAs have enjoyed far bigger wages and increases than front line workers,” wrote McGowan.

Union leaders have said their wages have risen to reflect inflation in Alberta’s recent hypergrowth economy, adding that while their wages have gone up five per cent relative to the rest of Canada, private sector wages have soared 25 per cent.

The announcement and the financial deliberations are set against a backdrop of an expected spring election.

Prentice has refused to confirm voters will go to the polls a year earlier than dictated by law, but has said his economic plan requires a mandate from the people.

All parties are busy signing up candidates.