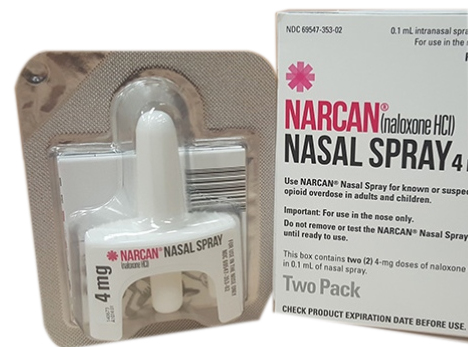 By Peter Cameron, The Canadian Press

Toronto: Calling opioids an “ongoing concern” in all parts of the province, Ontario’s provincial police said Friday it would equip all front-line officers with naloxone kits to protect them from potential exposure to fentanyl.

Each officer will be issued a kit with two doses of naloxone nasal spray while on duty, while members of selected specialized units, such as drug enforcement and community street crime units, will carry a personal kit all the time, Ontario Provincial Police said.

The OPP is not the first police force in the province to issue naloxone to front-line officers, Peterborough, Barrie, and Durham Region officers are among those already equipped with the opioid antidote that can reverse an overdose for approximately 20 minutes to one hour, depending on the strength of the opioid.

The primary purpose of the naloxone is for use if an officer is exposed. However, if there is a life-threatening situation and emergency medical services are not immediately available, officers will be trained to use it on members of the public, the OPP said.

“We take the health and safety of our members and our communities very seriously,” OPP Commissioner Vince Hawkes said in a statement.

“With the increased prevalence of fentanyl, fentanyl analogues and synthetic opioid powders on our streets, there is a very real danger of exposure and these steps are being taken to ensure the safety of those we serve and our officers,” Hawkes said.

“Equipping OPP officers with naloxone kits will give vulnerable people timely access to this life-saving drug,” she said. “When someone is overdosing, minutes can make the difference between life and death. This initiative will save lives.”

Health Canada testing has determined fentanyl was present in 114 OPP seizures in 2016 from the mainly rural communities it serves, “demonstrating it is an emerging and ongoing concern in all parts of Ontario,” the OPP said.

Test results for 2017 are not yet available, but it said the number of seizures of containing suspected fentanyl appears to be similar to 2016 levels.

The OPP said it is also making the use of personal protective equipment mandatory while conducting suspected drug searches, seizures and sampling to help ensure the safety of officers.

Front-line officers will be required to wear protective equipment including a respiratory mask, safety glasses or goggles, nitrile gloves and long sleeve shirt or jacket, it said.

Rob Jamieson, president of the Ontario Provincial Police Association, said officers are seeing more fentanyl in various forms so the chance of exposure is increased.

“Having additional personal protective equipment and naloxone on hand could very well save the life of one of our members, or a member of the public,” Jamieson said.

Acting Staff Sgt. Peter Leon said OPP officers will receive training on the use of naloxone, the protective equipment and new procedures on how to handle suspected controlled substances over the summer.