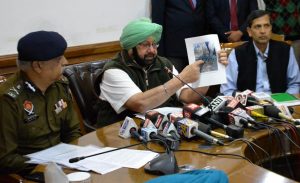 Chandigarh: Within 72 hours of the terror incident, the Punjab Police has arrested one person in connection with Sunday’s grenade attack on the Nirankari Satsang Bhawan that killed three persons, Chief Minister Amarinder Singh said here on Wednesday.Amarinder blamed Pakistan’s Inter-Services Intelligence (ISI) agency and the Pakistan-based masterminds of the Khalistan Liberation Force (KLF) for the terror attack.The arrested person has been identified as Bikramjit Singh, 26, a resident of Dhariwal village near Rajasansi area of Amritsar. he said. He was arrested early on Wednesday from near Loharka village in Amritsar district.The second person involved in the attack, identified as Avtar Singh, is still absconding.