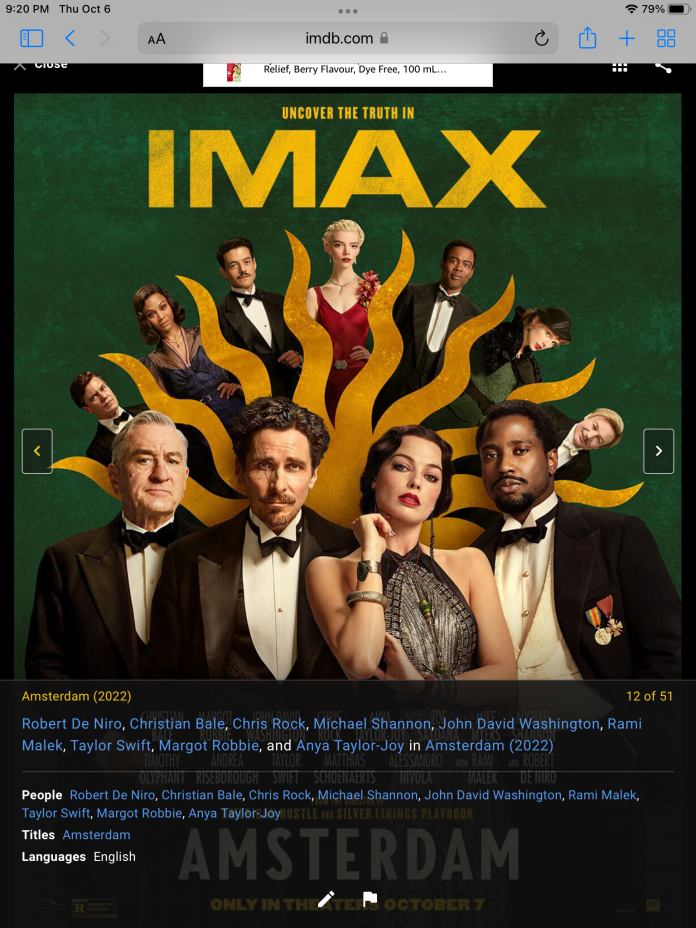 Good whodunnits rely on the unexpected. A dream cast and solid writing turns Amsterdam into a must see movie. Original with a Capitol O this 20th Century Fox Disney movie is a sharp trip down memory lands steeped in History, mystery murder most foul and mayhem. Here is a perfect example of moviemaking designed for adults that keeps you thinking throughout. Step out and journey down to your local Cineplex Cinema or Landmark Theatre in British Columbia to see this highly creative and contagious effort.
Cinephiles know that fall ushers in Academy Award worthy movies while the summer is typically reserved for popcorn blockbusters though the recent Tom Cruise spearheaded Maverick May have a thing or two to say about that come awards time if there’s any Justice in the world – or in Hollywood
Nothing, and I mean nothing is as it appears in Amsterdam. Said to be based on real events Christian Bale ( The Dark Knight) is outstanding as a quickly 1/2 Jewish doctor (?) operating out of New York in 1931. Talk about a mixed up messed up guy. Our good Dr. Burt Berendsen has a host of problems you wouldn’t wish on your worst enemy. Speaking of which much of Amsterdam relates to the war effort and Burt’s close comradely with his comrades in Arms, Harold Woodman ,
Flambouyant director David O. Russel pulls off here a tremendous effort and knocks it out of the park. Burt and friends move back and forth in time revealing how a mental threesome (?) in one of Europe’ most liberal cities in the days of Hitler wind up playing this a shadowy role in a mysterious murder year later in Upstate New York,
It’s all about the power. See how a group of veterans somehow figure into a plot by a group of mega rich Americans to take control of everything. Superb freewheeling performances from a list that include Michael Shannon, Margot Robbie and Robert De Niro enliven the nefarious deeds going on in Amsterdam- a truly remarkable and eventful movie.