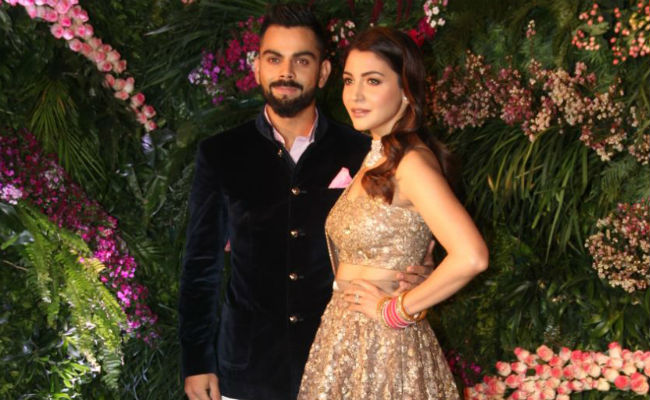 Mumbai: After hosting their first reception in Delhi, high-profile couple Virat Kohli and Anushka Sharma hosted their second reception attended by stars from both the sporting world and the film world here on Tuesday.

The couple looked beautiful. While Anushka seen in side slick hair with cascading curls and nude lips to go with the elegant vibe of her ensemble and wearing a Sabyasachi creation – a dull gold heavily embroidered and embellished lehenga set teamed with a matching dupatta, cinched at the waist with a signature Sabyasachi belt. She completed the heavy dress with simple earing studs, a diamond neck-piece and traditional Punjabi red bangles set.

Hubby Virat wore a navy velvet bandhgala which he paired with a pair of white pants and brown shoes.

Right from their environment-friendly invites with saplings to the anthology of Rumi’s poems as return gifts, the couple seems to have invested great thought in all the functions. They made sure that all the events reflected the spirit of their companionship and their personalities.

After wrapping the wedding festivities, Anushka and Virat will fly off to South Africa, where Virat will stay on for an upcoming series.

Anushka is scheduled to touch base in Mumbai after New Year celebrations, where she will resume her pending work commitments – a film with Aanand L. Rai, YRF’s “Sui Dhaaga” and the promotions of “Pari”.