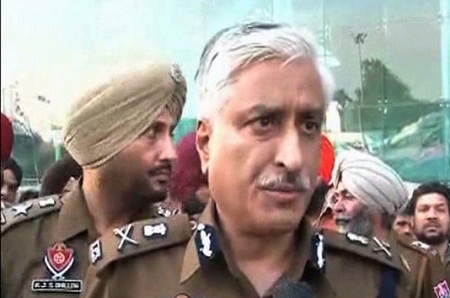 Dinanagar (Punjab), July 27 (IANS) The terrorists involved in Monday’s attack had grenades and AK-47 rifles, were well trained, and their modus operandi was suggestive, but it was early to say from where they came, Punjab Police said.
Talking to reporters after the day-long operation, Director General of Police Sumedh Singh Saini said all three assailants “were armed with AK-47 and grenades”.
He said police were examining their belongings to ascertain their identity.
“It is too early to say from where they have come,” Saini said after the 11-hour gun battle ended.
He said that the modus operandi of the terrorists, the way they launched the attack on this small town, the combat dress they were wearing and their weaponry were “suggestive”.
The terrorists were well equipped and carried two GPS systems, Saini said. “We will probe this matter further,” he said of the terrorists’ possible Pakistani link.
According to Saini, the terrorists first killed a man at a bus stand in the morning and two others at a hospital near the police station.
“We have lost four security personnel,” he said. The fatalities included three men serving in the Home Guards who were in the police complex. Also killed was Superintendent of Police Baljit Singh.