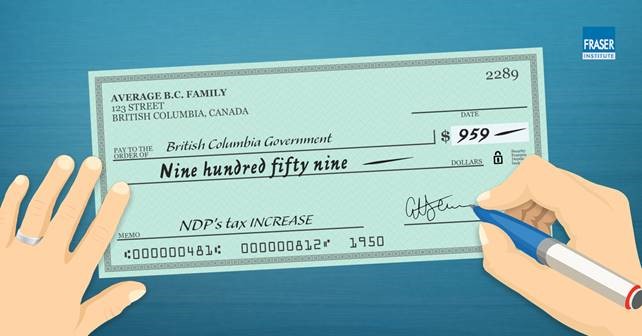 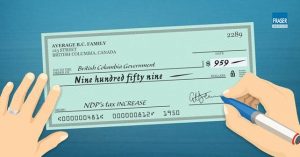 Vancouver: The average family in British Columbia will pay $969 more a year in taxes due to the B.C. government’s tax changes, finds a new study released by the Fraser Institute, an independent, non-partisan Canadian public policy think-tank.

“While the government claims it is making life more affordable for B.C. families, its tax changes mean the average family in B.C. will pay nearly $1,000 a year in higher taxes—that’s a significant amount of money,” said Niels Veldhuis, president of the Fraser Institute and co-author of Impact of Provincial Tax Changes on British Columbian Families.

The study finds that the totality of the government’s tax increases—assuming the carbon tax increase and new payroll health tax are fully implemented—will add $1.9 billion to the tax burden of British Columbians. Using the Fraser Institute’s Canadian Tax Simulator, the tax bill for the average B.C. family—with an income of $114,809 in 2018—will increase by $929 a year, driven largely by a $498 increase in fuel and carbon taxes and $360 in payroll and health taxes.

Crucially, the analysis does not include several residential property tax increases, such as the increased property transfer taxes, the foreign buyers tax, the speculation tax and the school tax, which together total more than $500 million in increased taxes.

Of course, some families with average incomes will be affected by these tax increases, including situations where they experience substantial appreciation in the value of their homes, or where property tax hikes result in higher rental prices for renters, in an already tight rental market.

“The evidence is clear—even excluding the increased residential property taxes, the average B.C. family is facing a significant tax hike as a result of this government’s tax changes,” Veldhuis said.