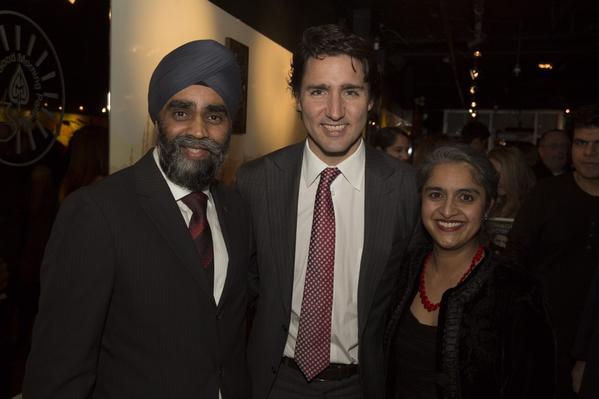 Vancouver: In a talk with Red FM host Harjinder Thind, Barj S. Dhahan said he is stepping aside from the race of Liberal nomination. Dhahan was intending to seek his nomination for the Liberal Party from Vancouver South riding.  During the radio talk show, Dhahan said he has decided to step aside in the large interest of the community; he does not want to see Punjabi community divided.
The Liberal nomination was expected to shape up as a battle between two camps of South Asian community but with Dhahan’s announcement former B.C. Regiment commander Lt. Col. Harjit Singh Sajjan’s nomination is almost final for Vancouver South.
Dhahan said South Vancouver has been home for my family for a long time. He said Liberal Party asked him to choose any other riding if he want to, but he refused.
Harjit Singh Sajjan is first Sikh to command a Canadian Army regiment. He was commander of the reserve B.C. Regiment. Liberals’ plan to launch Sajjan as star candidate, he could be described as war hero during Liberal campaign.  It is learnt that Liberal leader Justin Trudeau has been supporting Sajjan’s name as Liberal candidate from the riding.
On November 12, Lt. Col. Harjit Singh Sajjan tweeted, “Received green light to seek the Liberal nomination in Van-South. Look forward to the challenge.”Harjit Sajjan is described as family man with roots in Vancouver-South. Harjit Sajjan immigrated to Canada from India with his family when he was five years old. He has grown up in South Vancouver. Harjit is married to Dr. Kuljit Kaur Sajjan, a UBC-educated family doctor, and they have two young children.
The constituency was won by Conservative Wei Young in 2011 General Election but the federal riding was Liberal stronghold.