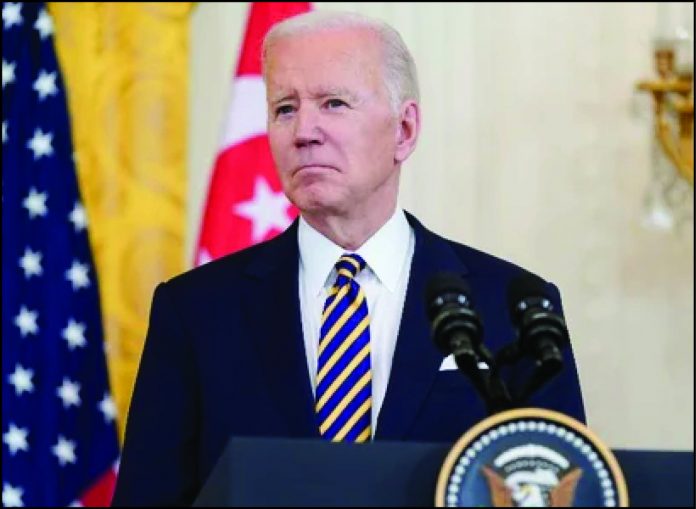 Washington (AP): Presidents typically say a few words before they turn legislation into law. But Joe Biden flipped the script Tuesday when it came time to put his signature on the Emmett Till Anti-Lynching Act.
He signed the bill at a desk in the White House Rose Garden. Then he spoke.
“All right. It’s law,’’ said the president, who was surrounded by Vice President Kamala Harris, members of Congress and top Justice Department officials. He was also joined by a descendant of Ida B. Wells, a Black journalist who reported on lynchings, and Rev. Wheeler Parker, a cousin of Till.
Biden said it’s “a little unusual to do the bill signing, not say anything and then speak. But that’s how we set it up.’’
He thanked the audience of civil rights leaders, Congressional Black Caucus members and other guests who kept pushing for the law for “never giving up, never ever giving up.’’
Congress first considered anti-lynching legislation more than 120 years ago. Until March of this year, it had failed to pass such legislation nearly 200 times, beginning with a bill introduced in 1900 by North Carolina Rep. George Henry White, the only Black member of Congress at the time.
Harris was a prime sponsor of the bill when she was in the Senate.
The Emmett Till Anti-Lynching Act is named for the Black teenager whose killing in Mississippi in the summer of 1955 became a galvanizing moment in the civil rights era. His grieving mother insisted on an open casket to show everyone how her son had been brutalized.
“It’s a long time coming,’’ said Parker, who was onstage with Biden when the president signed the bill. Parker, two years older than Till, was with his cousin at their relatives’ home in Mississippi and witnessed Till’s kidnapping.
In his remarks, Biden acknowledged the struggle to get a law on the books, and spoke about how lynchings were used to terrorize and intimidate Blacks in the United States. More than 4,400 Blacks died by lynching between 1877 and 1950, mostly in the South, he said.
“Lynching was pure terror, to enforce the lie that not everyone, not everyone belongs in America, not everyone is created equal,’’ he said.
Biden, who has many Black men and women in key positions throughout his administration, stressed that forms of racial terror continue in the United States, demonstrating the need for an anti-lynching statute.
“Racial hate isn’t an old problem it’s a persistent problem,’’ Biden said. “Hate never goes away. It only hides.’’