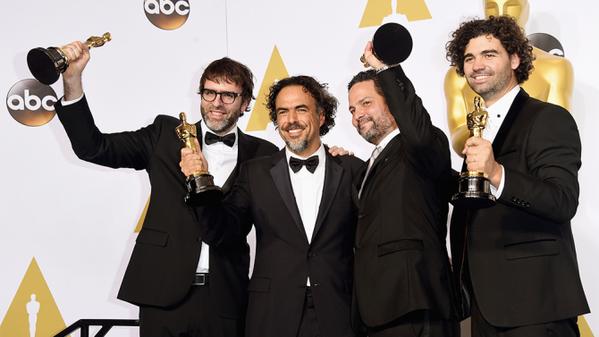 Los Angeles, Feb 23 (IANS) “Birdman”, a satirical tale of an ageing movie star attempting to reinvent himself via Broadway, clinched key honours Sunday night at the 87th Academy Awards, where India had a no show this time.
“Birdman”, which was nominated in nine categories, picked up four honours – Best Picture, Best Director (Alejandro Gonzalez Inarritu), Best Writing (Original Screenplay) and Best Cinematography – at the gala, which saw a melange of Hollywood stars come together to celebrate cinema.
Another big winner was “The Grand Budapest Hotel”, which tied with “Birdman” for four awards. The Wes Anderson-directorial won Costume Design, Makeup and Hairstyling, Music (Original Score)and Production Design.
One of the season’s favourites – “Boyhood” – could manage just one Oscar for Patricia Arquette. She secured the Best Supporting Actress award – and delivered a fitting acceptance speech, demanding equal pay for women. In response, veteran actress Meryl Streep stood up and cheered at Hollywood’s Dolby Theatre.
“The Imitation Game” went back home with only one award for Graham Moore’s adapted screenplay. Even “American Sniper” managed just one win – sound editing.
It was Eddie Redmayne’s victory for his performance as Stephen Hawking in “The Theory Of Everything” which turned out to be a highlight at the Oscars ceremony. Calling himself “one very very lucky man”, he dedicated the award to the film crew and his wife, the Hawking family and to “everyone around the world suffering from ALS”.
The best actress title went to Julianne Moore for her portrayal of a woman diagnosed with early onset dementia in “Still Alice”.
J.K. Simmons won best supporting actor for his role as a tyrannical music teacher in
“Whiplash”, which also won for editing and sound mixing at the event, hosted by Neil Patrick Harris.
“Selma”, which depicts the US civil rights struggle, won the best original song for “Glory”. John Legend and Common took to the stage to perform the number during the ceremony. While accepting the award, Legend said voting-right restrictions and incarceration rates for black menshowed that there was continuing need for action.
“The struggle for justice is right now,” he said, reports guardian.co.uk.
Among the documentary features, it was Laura Poitras’s “Citizenfour”, on Edward Snowden, which received the golden statuette.
Poland’s “Ida” walked away with the accolades in the foreign language film category, to which Indian movie “Liar’s Dice” failed to make a cut even as a nomination.