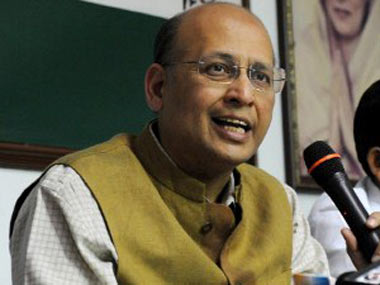 “This is a classic expression of how black money is being generated in India, and that too by non-other than tall leaders of the Congress,” Patra said.

“The settlement commission has added about Rs.92 crore to the professional income of Singhvi over a period of three years. Why was he not declaring this income?” Patra questioned.

Singhvi’s office however issued a statement Tuesday evening which said that the order of Settlement commission has been stayed by the high court.

“Thus, in law, no order exists and none is operative,” the staement said.

It also noted that there is no issue of wrongful receipts.

“Hundred percent receipts are admittedly by cheque. Even the allegation (wrongly) made is only of inflated expenses claimed,” the statement said.

It also said that before any coercive steps were taken by department, Singhvi’s chartered accountant had reported destruction of records over two years ago.

“The report had been independently filed and recorded by the police and has not been displaced in any manner,” the statement said.

It also said that Singhvi, a Congress MP and spokesman, has been among the top taxpayers in his category in the country.

The statement said that “various ‘friends’ of the assessee, in politics and the profession, are raking this up to create a public space for private statutory confidential proceedings which started in 2013”.

According to a media report, the settlement commission has added over Rs.91.95 crore to Singhvi’s declared professional income over a three-year period and slapped a penalty of Rs.56.67 crore.

Singhvi, according to the report, told the commission that a termite attack on the premises of his chartered accountant in December 2012 destroyed all records and expense vouchers.

Patra however alleged that Singhvi has no document to back these expenses. “He says that the documents were eaten away by termites. Sadly those who destroyed the economy of the country acting as corrupt termites are trying to shift the blame to the poor real termites,” he said.