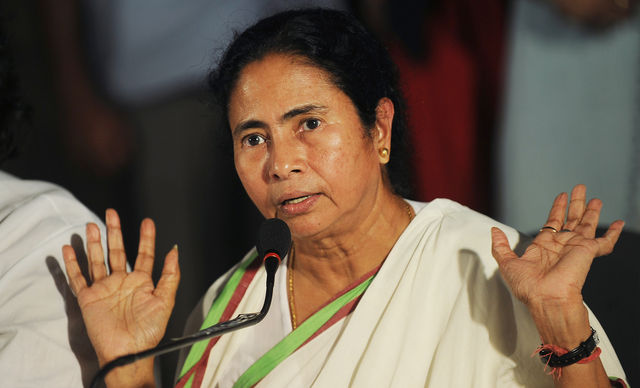 Kolkata/New Delhi: The BJP on Wednesday disowned a youth leader whose offer of Rs 11 lakh to anyone beheading West Bengal Chief Minister Mamata Banerjee sparked outrage. Police filed a case against him.

An unperturbed Banerjee said she considers such threats as “blessings”.

As the Trinamool Congress and Congress raised the issue angrily in Parliament, demanding action against Yogesh Varshney, the Bharatiya Janata Party distanced itself from the Aligarh-based leader.

“We doubt if he has the credibility to be a BJP Yuva Morcha leader. Such comments cannot be supported by anyone. He has made a most jihadi-like statement,” Sinha said in Kolkata.

“We will continue to oppose Mamata Banerjee on political grounds. But the BJP does not approve the politics of hatred and murder though such extreme comments were made by Trinamool Congress leaders earlier,” he said.

Speaking in Murshidabad, Banerjee said: “I am being abused variously. I consider that as blessings. The more they abuse us, they more we will march forward.

“Now we are in Bengal. Slowly we will move on to Bihar, Odisha, Jharkhand, Delhi, Punjab and Uttar Pradesh.”

“The statement … is completely wrong. We condemn it. Mamata Banerjee is an elected leader and she must be respected,” he said.

Varshney of the Bharatiya Janata Yuva Morcha made the statement after police clashed with people taking part in a Hanuman Jayanti rally in West Bengal’s Birbhum district on Tuesday.

“She stands up for Muslims. Aren’t Hindus human beings? If there was some humanity, then there wouldn’t be so much discrimination against the Hindus,” he said after apparently seeing a video of police assaulting the rallyists to disperse them.

“There is only one thought that crossed my mind after watching that video… Whoever will cut off Mamata Banerjee’s head, I will give that person Rs 11 lakh as reward,” Varshney said.

Varshney’s offer went viral on social media, triggering widespread condemnation. He later apologised, saying he made the statement in a fit of rage.

Describing the comment as a provocation against a popular Chief Minister and an attack on women, opposition leaders denounced Varshney.

Trinamool Secretary General Partha Chatterjee said people like Varshney had no idea what stuff Banerjee was made of.

“She was thrown out of the Kolkata police headquarters and dragged out of Writers Building (Secretariat) during CPI-M regime. Police dragged her by the hair from Singur during the land movement (in 2006) but nothing could stop her,” Chatterjee said.

Eminent Bengali writer Nabanita Deb Sen said: “I feel so annoyed. Where are we living? Fatwas are being issued, death threats are being given. Why shouldn’t he be arrested and punished?”

Thespian Bivas Chakraborty added: “Politics is going into the hands of mentally disbalanced and insane people. In such a situation, nobody is secure.”

“I urge the government to take all possible action against the leader who has threatened a popular and down-to-earth Chief Minister,” he said.

Supporting him, Congress leader Mallikarjun Kharge said action should be taken against the BJP leader.