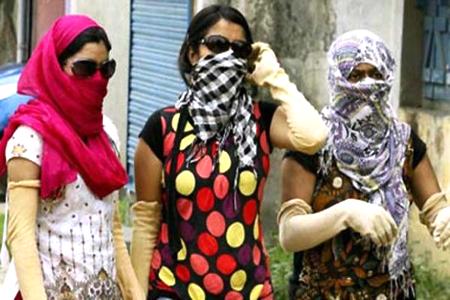 New Delhi/Kolkata/Nagpur/Hyderabad, May 27 (IANS) With a blistering heat wave sweeping across the country forcing people to stay indoors, the toll in Telangana and Andhra Pradesh alone mounted to 1,200 on Wednesday as the national capital reported its first two victims of the season.

Guntur in Andhra Pradesh and Wardha in Maharashtra recorded the highest temperature of the day at 47 degrees Celsius. However, Kolkata that has also been reeling under the scorching heat, got some respite as the India Meteorological Department (IMD) has forecast rain and thunder shower in the next few days.

“Light rain and thundershowers are likely to bring some relief to the eastern state from the searing heat and humidity in the next few days,” said a Met official urging people to stay indoors until the pleasant weather arrives.

Two people died due to the heat in Delhi, said an official of the All Indian Institute of Medical Sciences (AIIMS).

The mercury in the national capital, however, saw a dip with the maximum temperature recorded at 41.8 degree Celsius.

According to the weather office, Delhi is likely to have an overcast sky on Thursday and some parts of the city are likely to witness dust storms.

Children were seen taking a dip in the ponds and other water bodies at the central vista flanking Rajpath. A lot of people also descended on Delhi Metro rail stations, especially when the scorching heat was at its peak in the afternoon.

The situation in the financial capital Mumbai was more or less the same, and elsewhere in Maharashtra the mercury soared to 47 degrees Celsius in Wardha, while Nagpur and Chandrapur were close behind at 46 degrees.

The hill station of Mahabaleshwar also experienced rising temperature — a high of 29 degrees, which was the lowest temperature recorded in the state on Wednesday.

Coastal areas like Mumbai sweltered at 36 degrees Celsius and other seaside districts like Raigad, Ratnagiri and Sindhudurg were just a notch lower at 35 degrees but with high humidity levels.

In Kolkata, a section of taxi drivers pulled their vehicles off road in the afternoon and hand rickshaw-pullers found it challenging to find passengers as most people stayed indoors.

Air-conditioned buses and the underground Metro railway were the preferred modes of transport in the eastern metropolis.

To beat the heat and the health hazards caused by the heat, families planned travel to hill stations.

According to travel agency Paradise Travels, there has been a steep rise in the number of families booking trips to hill stations such as Mount Abu, Shillong, Tawang and several other places mostly in the northeastern part of the country.

“This time we have seen almost 30 percent rise in the number of bookings for hill stations.

“People are mostly preferring the places in northeast India, where the temperatures are comparatively lower than other parts of the country,” Piyush Duggal, the manager of the Kolkata-based travel agency told IANS.

Four deaths have been reported in the heat wave conditions this month in West Bengal.

In Hyderabad, the heat wave sweeping across Andhra Pradesh and Telangana claimed 87 more lives on Wednesday, taking the toll to over 1,200.

There was no respite from the sweltering heat as both the states recorded temperatures three to seven degree Celsius higher than the average. While 50 people succumbed to sunstroke in Andhra Pradesh, 37 died in Telangana on Wednesday.

Officials in the two states had confirmed 1,133 deaths till Tuesday night. While Andhra Pradesh accounted for 867 deaths, 266 people died in Telangana.

Disaster management department officials said they were revising the figures after receiving confirmation from field-level officials about the deaths.

Though temperatures dropped in parts of Telangana and also in north coastal Andhra on Wednesday, both the states continued to reel under the searing heat.

The Hyderabad Meteorological Centre warned that severe heat wave conditions may continue for another 48 hours. The heat wave, attributed to dry winds from the north-westerly direction, may abate after two days.

The highest temperature of 47 degrees Celsius was recorded at Jangamaheswarapuram in Guntur district of Andhra Pradesh on Wednesday while Vijayawada, Bapatla and Machilipatnam sizzled at 46 degrees.

In view of the rising number of deaths caused by the extreme summer, the Andhra Pradesh government on Tuesday had declared ex-gratia payment of Rs.1 lakh for the kin of each of the victims.