Wandering through the offerings of late night of retro television I found a few police gems from fifty and sixty years ago.  Anyone remember Dragnet with Jack Webb as, Mister Personality, Sgt. Joe Friday? How about Lieutenant Columbo, solving the trickiest dastardly crimes, without any help from his police department, disguised as wrinkled raincoat.  It made me curious about all the names and references that have evolved, referring to our police, our thin blue line, who do a marvelous job keeping the herd (society) safe from the ever-present circling predators (criminals).

One of the most curious names carried by police is that of Bobby. This goes back to 1829 when Sir Robert Peel, the British Home Secretary, created the first modern police force called the Metropolitan Police Service to police London.  The officers were uniformed in dark blue and wore top hats to avoid looking too military in appearance. Eventually they adopted the domed helmets they wear today. Originally they were called ‘Peelers’ referring to Robert Peel, but the nickname Bobby from Robert Peel was the name that has persisted to present day.

Mounties: Royal Canadian Mounted Police, the serious kind, not the vocal back up chorus to Monty Python’s Lumberjack song. Everything about the dress uniform is iconic and universally recognizable.  Foremost is the Stetson hat.  To many people, a Stetson is a cowboy hat. Yes, they make those too, but the flat rim Stetson was first used unofficially by the Royal North-West Mounted Police, in place of the traditional white pith helmet, which was not practical for the Canadian West. The name Mountie referred to the officer being ‘mounted’ on his mode of transportation, a one horsepower vehicle that burned hay. 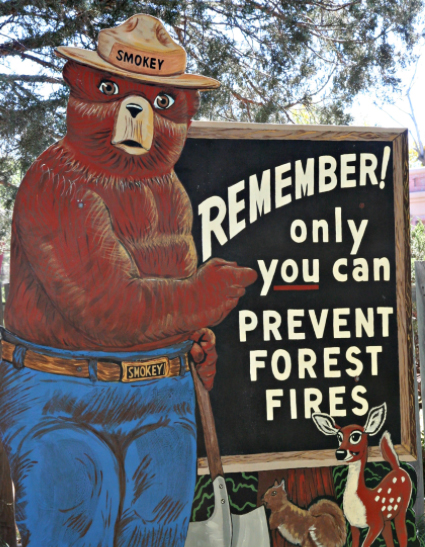 Bears:  The US Park Ranger Service also used the Stetson, which was included on the head of Smokey the Bear in a ‘prevent forest fires’ campaign in 1944. Since a number of American police forces also use the Stetson, people made the inevitable comparison and started calling police with (and even without) Stetsons, ‘Smokey Bear’  ‘Smokies’ ‘Bears’ and ‘County Mounties.’

Cops, is another common name, originally Coppers (dated 1704). Copper meant ‘To Capture‘ from old French, or ‘Caper’ from the Latin ‘Capere‘. Another belief was that COP was an acronym for Constable On Patrol, or from the copper uniform buttons.  Experts, which I am not, say no.  The first explanation is the right one (to be coppered by a cop would likely cap off a criminal caper or career quickly!

Dicks and Gumshoes:  Dick was a slang term for detective, and was apparently coined in Canada (which is good because Canada coins great coins even if we are all a bit loonie). The name was brought south by rumrunners during prohibition. The fictional comic strip character, square-jawed police detective, Dick Tracy, was given the first name of “Dick” in token of its being a slang expression for “detective.”  Gumshoe was another term for detectives who wore soft-heeled shoes so they could follow suspects without being noticed. I think it was because they had to do so much walking, it was better than becoming flatfooted. And speaking of feet, the term Flat Foot was another derogatory name hung on the weary beat cop who, spending his whole career on his feet (they were all men in those days) eventually fell victim to the painful condition of fallen arches.

Paddy Wagon believed to have originated from the New York Policemen who drove horse-drawn boxes to collect rowdies and rioters. The force was derived mainly from large numbers of large Irishmen known as Pattys or Paddys, relied on their physical prowess and a nightstick or shillelagh (pronounced shill-ay-lee) which persuaded many a partygoer or ne’er do well to see the policeman’s point of view before embarking upon a journey in the prisoner’s wagon, called the Black Mariah, or Paddy Wagon.

So behave yourselves until next week, because you never know when the fuzz – believed to be a simple mispronunciation of the word force – are watching.

Sure, and away with ye now!