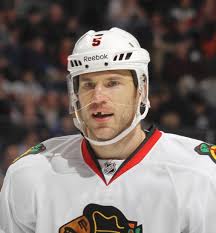 By Sheryl Ubelacker, THE CANADIAN PRESS

TORONTO: Researchers who autopsied the brain of former NHL defenceman Steve Montador have discovered he had chronic traumatic encephalopathy, or CTE, the progressively degenerative disease that’s been linked to repeated blows to the head.

Montador, who died in February at age 35 of an undisclosed cause, had sustained multiple concussions during his hockey career and had been exhibiting signs of a possible brain disorder, including depression, memory problems and erratic behaviour.

His brain was donated after his death for analysis to the Canadian Sports Concussion Project at Toronto’s Krembil Neuroscience Centre, and researchers confirmed the diagnosis of CTE on Tuesday.

Neurosurgeon Dr. Charles Tator, head of the project, said the analysis of Montador’s brain showed he had widespread deposits of a protein called hyperphosphorylated tau. The abnormal protein in brain cells is a marker for CTE.

In the wake of the announcement, Montador’s family said they plan to launch a lawsuit against the NHL, saying in a statement on their lawyer’s website that “the finding of widespread CTE in Steven’s brain helps us all better understand that his brain was ravaged by disease and he was unable to control it.”

William Gibbs, an attorney at the Chicago-based firm Corboy & Demetrio, said on the website that the neuropathological analysis confirmed the family’s suspicions that Montador’s brain was “decaying due to the head hits he endured during his NHL career.”

“CTE has afflicted yet another young athlete and his family. It is heartbreaking that such a vibrant young man sustained such monumental brain damage while playing a professional sport,” said Gibbs.

His firm is also representing the family of Derek Boogaard in their lawsuit against the NHL. The 28-year-old hockey enforcer died in 2011 of an apparently accidental overdose of alcohol and painkillers. Despite his young age, a brain autopsy found Boogaard already had severe CTE.

A class-action lawsuit, the combination of several suits by more than 200 former NHL players, was also filed in October. It’s seeking unspecified financial damages and NHL-funded medical monitoring for neurological disorders, alleging the league had the knowledge and resources to better prevent head trauma, failed to properly warn players of such risks and promoted violent play that led to their injuries.

The NHL did not immediately return an email seeking comment.

Montador played for six NHL teams during his career, including the Calgary Flames, Boston Bruins and Chicago Blackhawks. He had arranged for his brain to be donated to the Krembil Neuroscience Centre upon his death.

John Forzani, a Canadian businessman and former offensive linesman for the Calgary Stampeders, did not have CTE, despite having suffered multiple concussions during his career. Forzani’s brain was donated to the project after his death last October at age 67.

However, a third donor _ an unidentified 76-year-old former CFL and NFL player _ did have the brain-destroying disease. An offensive and defensive tackle with several teams in the CFL and for a short period in the NFL, the athlete had sustained repeated concussions over a 14-year career, some of which caused unconsciousness.

Sometime after retirement, he developed dementia for which he was treated for many years before his death. The autopsy results confirmed the presence of CTE in his brain.

“These results indicate that in some athletes multiple concussions lead to the development of CTE, but also that certain individuals may be more vulnerable than others to developing CTE as a result of concussions,” said Dr. Lili-Naz Hazrati, a neuropathologist at the University Health Network who conducted the brain examinations.

“Adding these findings to the other results we’ve had to date reflects the spectrum of our findings by showing that concussions can affect the brain in different ways.”

So far, the researchers have analyzed the donated brains of 16 professional athletes, many of whom played in the CFL or NHL and suffered repeated concussions. About half were found to have had the hallmarks of CTE or another neurological disease, while the others had no signs of the progressively destructive brain disorders, said Tator.

“We really don’t know for sure, and that’s really the reason for doing this research and trying to detect early stages of it.”

CTE can be diagnosed only with a brain autopsy after death, but Tator said researchers are trying to find biomarkers for the disease while a person is alive.

“Once we figure out how this stuff (tau) gets deposited and why it gets deposited, then that might lead to clues about exactly what it is,” said Tator. “So it’s very important to find out the mechanism.

“If we could detect it in life, we could try a whole bunch of drugs to see if they prevent the deposition of this abnormal protein.