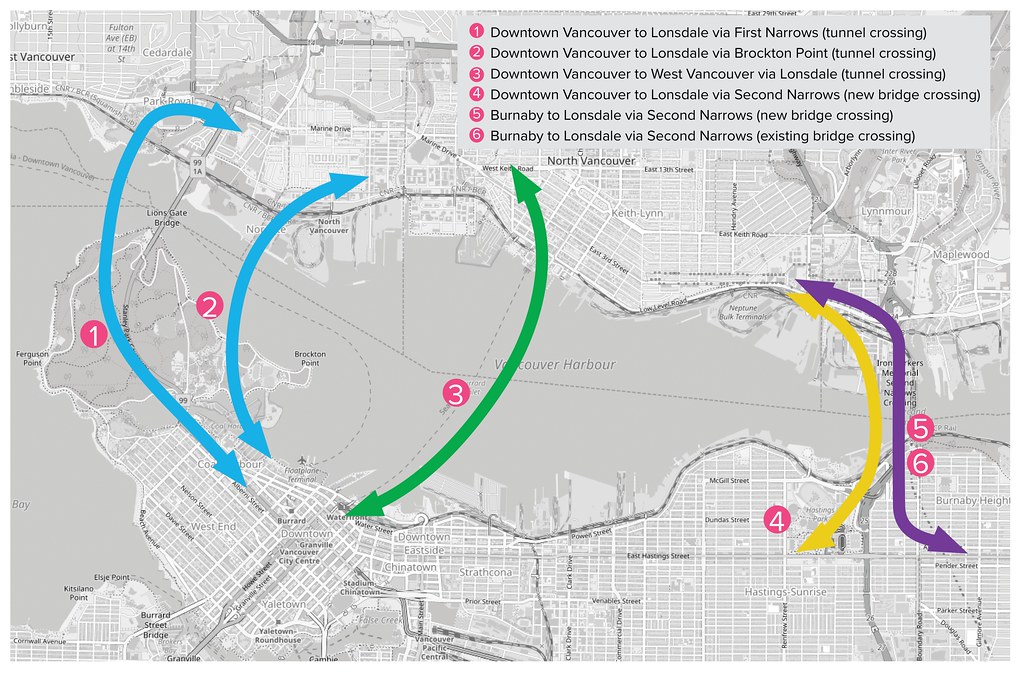 Vancouver: The technical feasibility study of a potential high-capacity transit crossing from Vancouver across the Burrard Inlet to the North Shore has completed Phase 1.

Six potential options have been shortlisted to be explored further in Phase 2.

“We know that people living and working on the North Shore are frustrated with traffic congestion that has been increasing for years,” said Claire Trevena, Minister of Transportation and Infrastructure. “By investing in this study, our government is helping to take a serious look at solutions that expand our public transportation network to better connect communities and to help people move around freely. The results from this study will support the North Shore and surrounding communities with their long-term transportation planning.”

The Province has partnered with local governments on the North Shore and in Vancouver on a feasibility study for a high-capacity transit crossing across Burrard Inlet. The first phase of the two-phase study, led by Mott MacDonald Canada, involved a brainstorm and preliminary screening of possible crossing points that could support a more transit-oriented North Shore with better connections to Vancouver and the rest of the region. It also considered the compatibility of a transit crossing with existing and future land use and the potential for affordable housing.

This work resulted in six general routes that will be further explored in Phase 2 (type of crossing in parentheses):

Connecting Lonsdale City Centre with Vancouver’s metropolitan core and the regional rapid transit network is one of the recommendations put forward by the Integrated North Shore Transportation Planning Project (INSTPP), led by Bowinn Ma, MLA for North Vancouver-Lonsdale, in 2018.

Work on the remaining recommendations of INSTPP continues through Next Step (NXSTPP), a working group that includes all levels of government on the North Shore that work in partnership to improve mobility both in and around the region. This study is one way that the Province and the City of Vancouver are helping support the NXSTPP working group.

“I hear from community members every day about how transportation challenges on the North Shore impact their lives,” said Ma. “In addition to seeking convenient ways to get around, people are eager to embrace more socially, environmentally responsible modes of transportation. This technical feasibility study to find a rapid transit solution across the Burrard Inlet is an important step toward a third fixed-link crossing to the North Shore.”

Making investments to improve transit is part of the B.C. government’s CleanBC plan. Initiatives in the CleanBC plan aim to make transit a more-accessible and efficient option for all British Columbians – reducing congestion and carbon pollution. CleanBC was developed in collaboration with the BC Green Party caucus, and supports the commitment in the Confidence and Supply Agreement to implement climate action to meet B.C.’s emission targets.