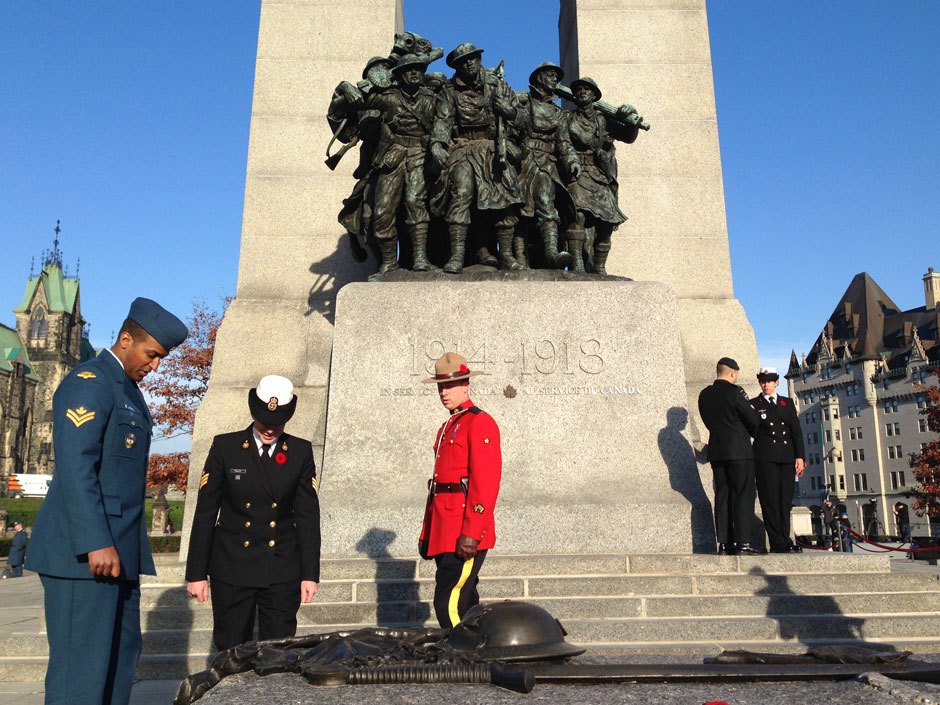 OTTAWA: Tens of thousands of people surrounded the sunshine-bathed National War Memorial on Tuesday as Gov. Gen. David Johnston formally rededicated the monument in the name of all who have died in the service of Canada.

Clad in full military uniform, Johnston was standing just steps away from the spot where Cpl. Nathan Cirillo gave his life just three weeks ago in an attack on Parliament Hill that has given this year’s Remembrance Day a laser-sharp currency.

Johnston said Cirillo and Warrant Officer Patrice Vincent, who was killed two days earlier in Quebec at the hands of man with jihadist sympathies, have joined the ranks of thousands of other dead, who will always be remembered.

“Freedom without peace is agony, and peace without freedom is slavery, and we will tolerate neither. This is the truth we owe our dead,” Johnston said.

He urged the crowd to look closely at the towering bronze statues of Peace and Freedom atop the monument, as well as the Tomb of the Unknown Soldier, which sits at its base.

“We don’t know his name. He is our unknown soldier. In anonymity he honours all Canadians who died and may yet die for their country,” Johnston said.

“We will stand on guard for him and for them, as did Nathan Cirillo, who takes his place among them. We will strive for peace and for freedom, as did Patrice Vincent, who joins them also.”

There is a new inscription on the memorial’s granite wall _ “In Service to Canada – Au service du Canada.” The dates of the Afghanistan mission and the South African War have also been added.

Princess Anne was on hand to deliver a message from the Queen, who said it is fitting to rededicate the monument to all Canadians who gave their lives in the service of peace, justice and freedom.

“’Seventy-five years ago, King George VI and Queen Elizabeth dedicated this National War Memorial in honour of all those who paid the supreme sacrifice in the Great War,” the Princess Royal said on the Queen’s behalf.

“Today, it is fitting that with this ceremony of rededication, we pay tribute to all those Canadians who in the intervening years have laid down their lives in the service of peace, justice and freedom.”’

Johnston spoke of the terrible death toll of the First World War, then called the Great War, and the promises made to remember the dead. He said Canadians refused to forget after the Great War.

“We noted the names and recorded them in books and engraved them on walls in the hope that we would ever protect them against anonymity,” he said.

“Today we stand as one, in silent tribute, not only to keep the vow made long ago but also to rededicate this symbol of that promise.”

As a consequence of the Oct. 22 attack on Parliament Hill _ Cirillo’s killer, Michael Zehaf Bibeau, was himself gunned down in a shootout minutes later in the halls of Parliament’s Centre Block _ security was visibly heightened for this year’s ceremony in Ottawa.

Gun-toting security personnel could be seen on nearby rooftops, and a heavily armed security detail was visible outside the entrances to nearby Langevin Block, which houses the Prime Minister’s Office.

As the morning unfolded, ceremonies were taking place across the country, including in Halifax’s Grand Parade Square, where hundreds _ including NDP Leader Tom Mulcair _ assembled for the service.

A cannon shot rang out from Citadel Hill above the cenotaph as a bugler sounded the Last Post.

Dennis Floresco, a retired fellow member of the Argyll and Sutherland Highlanders, to which Cirillo belonged, says he was one of the last people to send the reservist off to Ottawa.

Floresco said Remembrance Day is about standing tall for all branches of the Armed Forces and acknowledging the sacrifices soldiers have made going back hundreds of years.

In Ottawa, huge crowds were on hand. No official police estimates were immediately available, but one officer, a veteran of Remembrance Day ceremonies past, pegged the size of the crowd at more than 30,000 people.

The Royal Canadian Legion predicted attendance of as many as 80,000. It said poppy sales have jumped this year to more than 19 million compared with 18 million last year.

Prime Minister Stephen Harper was also on hand, having flown halfway around the world from Beijing for the ceremony, after which he’ll resume his travels almost immediately, bound for New Zealand.

Senior officers and politicians were also there, along with Gisele Michaud, the Silver Cross Mother, whose youngest son, Master Cpl. Charles-Philippe Michaud, died of injuries suffered in Afghanistan in 2009.

The diplomatic corps was out in force, along with various veterans groups and young people’s organizations.

The commemoration included the familiar rituals of the piper’s lament, the Last Post, the artillery salute and the recitation of the Act of Remembrance taken from Laurence Binyon’s poem, “For the Fallen.”

“They shall grow not old, as we that are left grow old …”

Tuesday marked the second time the memorial has been rededicated. In May 1982, the dates of the Second World War and the Korean War were added.

Princess Anne paid tribute to Cirillo and Vincent shortly after her arrival in Ottawa on Monday. Her grandfather first dedicated the monument in 1939, just months before the Second World War began.