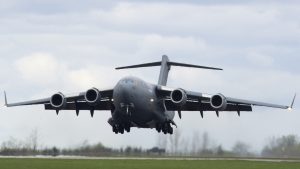 Ottawa: The Canadian Armed Forces (CAF) have sent air assets, liaison and personnel to support the ongoing emergency response to the wildfires in British Columbia.
The Province of British Columbia requested Government of Canada assistance in the form of CAF air assets to conduct a variety of tasks, including assisting with the evacuation of the local population affected by the wildfires and assisting the ground operations by providing airlift capacities for first responders and equipment.
The CAF stand ready to provide highly-trained personnel and unique resources tailored to help Canadians during periods of uncertainty and distress following natural disasters.
“Skilled and dedicated Canadian Armed Forces personnel always stand ready to help fellow Canadians in need. Partners across the Government of Canada, including the Canadian Armed Forces, will continue to provide support to the Province of British Columbia as they fight these wildfires and will continue to do so as long as the need exists,” said Harjit S. Sajjan, Defence Minister.
Quick Facts
• The CAF has deployed a CC-177 Globemaster III, a CC-130J Hercules, two CH-147F Chinook, and three Ch-146 Griffon to British Columbia to support the wildfires operations.
• CAF personnel will not conduct law enforcement or security tasks during their deployment.
• Public Safety Canada is responsible for coordinating the Government of Canada emergency response. Canadian Armed Forces personnel are in continuous liaison with Public Safety, other federal partners, and the Province of British Columbia to ensure a synchronized response to situation.
• CAF assistance in support of the Province of British Columbia’s emergency response is undertaken as part of Operation LENTUS, the CAF contingency plan that outlines the joint response to provide support for Humanitarian Assistance and Disaster Response to provincial and territorial authorities in the case of a major natural disaster.