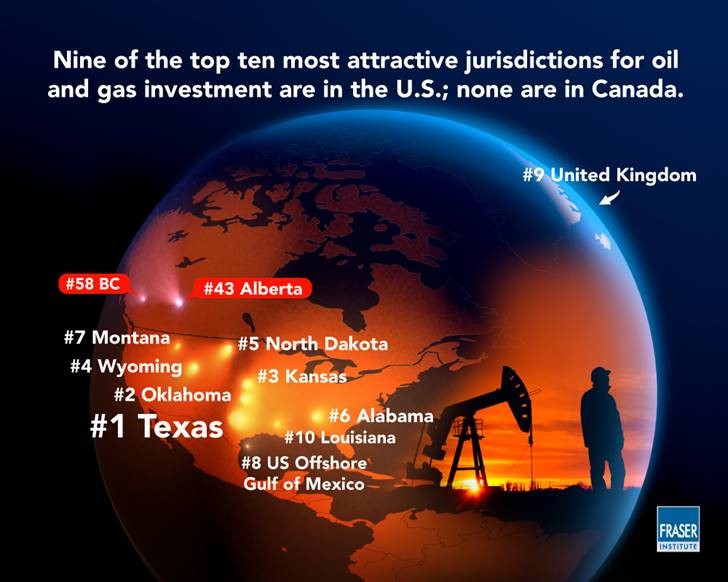 Calgary: For the first time in more than five years, no Canadian province ranked in the top 10 most-attractive jurisdictions for oil and gas investment, according to an annual global survey of petroleum-sector executives released by the Fraser Institute, an independent, non-partisan, Canadian public policy think-tank.

And for the second straight year, Alberta and British Columbia ranked as the least-attractive jurisdictions in Canada for oil and gas investment.

“Onerous regulations, higher taxes and a lack of pipeline capacity are taking their toll on Canada’s energy sector, and as a result, investors are looking elsewhere to invest,” said Kenneth Green, resident scholar and research chair in energy and natural resource studies at the Fraser Institute and co-author of the 2018 Global Petroleum Survey.

This year, B.C. was the lowest-ranked Canadian province at 58th (out of 80) on the Policy Perception Index, a comprehensive measure of the extent policy deters oil and gas investment. Crucially, 80 per cent of respondents cited the high costs of regulatory compliance in B.C., and 81 per cent cited political instability in the province as deterrents to investment.

Elsewhere in Canada, Manitoba (16th overall) was the top-ranked province followed by Saskatchewan (18th, down from 7th last year). Newfoundland and Labrador, which ranked 4th globally last year, dropped to 26th this year.

“Policymakers at the federal and provincial levels must be aware of the impact their decisions have on attracting or deterring valuable investment dollars.”