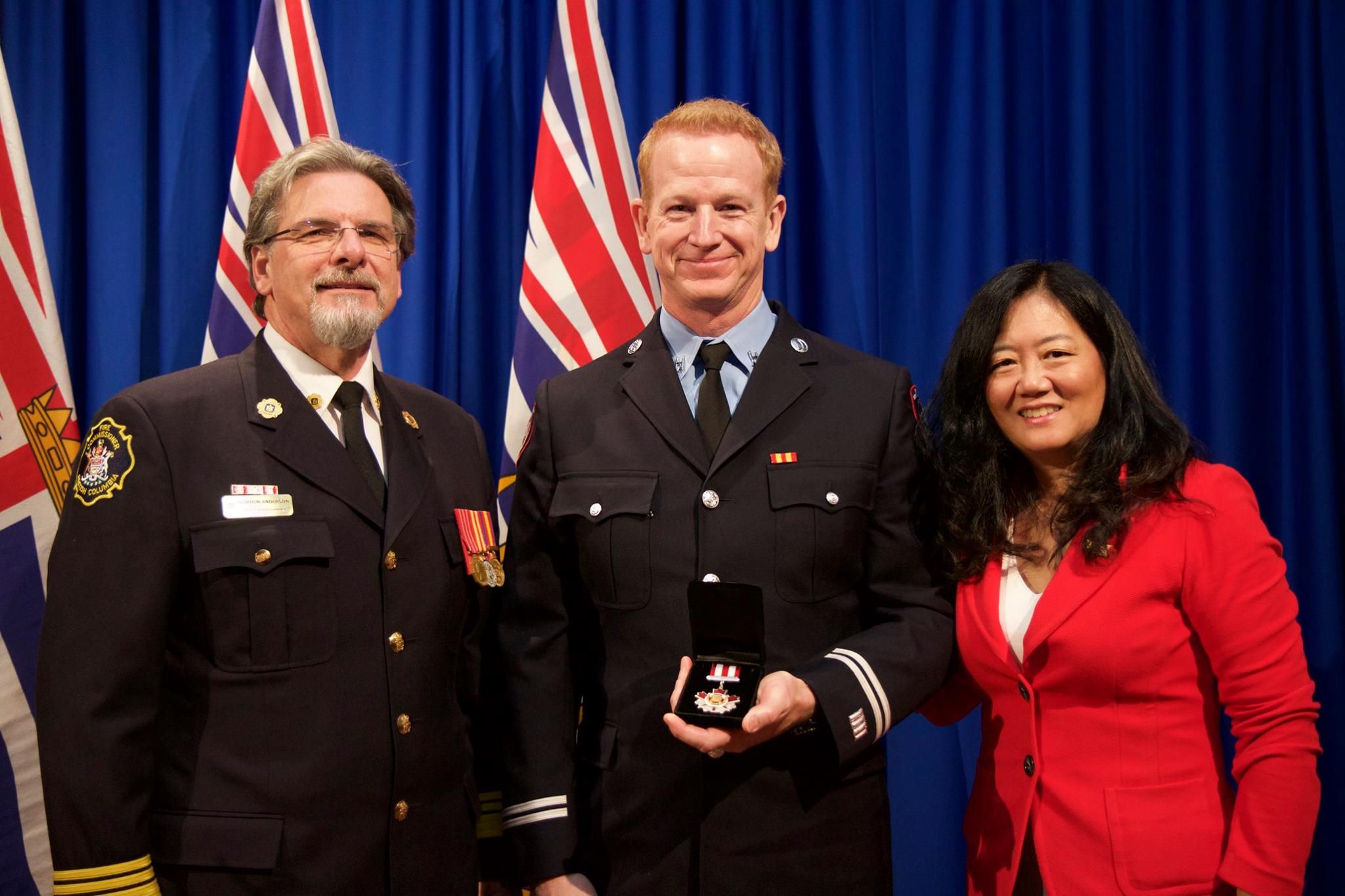 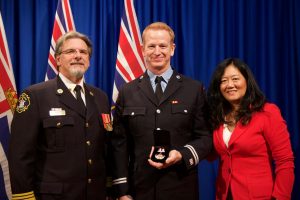 North Vancouver: Captain Kit Little of the District of North Vancouver’s Fire and Rescue Services has today been honoured with a rare medal of bravery for his courageous actions in saving the life of a woman trapped in an apartment fire.

On the morning of July 18, 2016, firefighting crews from both the North Vancouver City and the District of North Vancouver fire departments responded to an engulfed apartment building. Upon arrival, firefighters found residents calling for help on the balconies of the upper floors.

As interior fire conditions were too extreme to undertake rescues from the interior hallways, crews instead used ladders to reach the balconies. A firefighter went up one of these ladders, but was unable to reach a senior occupant who was unable to get over the railing. Following the first unsuccessful rescue attempt, Captain Little went up the ladder in a second attempt to rescue the senior occupant. When it became apparent to Captain Little that his breathing apparatus and helmet would prevent a successful rescue, he further placed himself in harm’s way by removing this safety equipment in order to reach the trapped occupant.

Sadly, there was also a tragic outcome to this fire as a tenant in a separate area of the building perished in the blaze.

The British Columbia Firefighter Medal of Bravery is awarded to firefighters who have performed acts of courage and bravery without concern for their own personal safety. Only two such awards have been handed out in the past 10 years – one in 2011 and one in 2014.

Minister of State for Emergency Preparedness, Naomi Yamamoto said: “When life-or-death situations demand selfless and heroic actions, firefighters are often the ones to rise to those challenges to ensure the safest possible outcomes. In rare occasions, firefighters show courage beyond what could reasonably be expected. Captain Little is deserving of this great honour, and it is fitting that he be awarded the B.C. Firefighter Medal of Bravery.”

Fire commissioner for British Columbia, Gordon Anderson said: “Captain Little’s actions were taken at considerable personal risk in the face of severe fire conditions, to ensure the safety of a trapped resident. The award of this medal is a well-deserved recognition of the bravery that he exhibited in undertaking this rescue.”

Mayor of the District of North Vancouver, Richard Walton said: “Captain Little’s efforts at that unfortunate fire exemplify the character, integrity, work ethic and public service focus that every municipality seeks in its employees, and most certainly in its fire and rescue staff. We are grateful for the contribution he made that day in our community, and for the contribution he makes every day that he reports for service as a member of our Fire and Rescue Services team in the District of North Vancouver.”