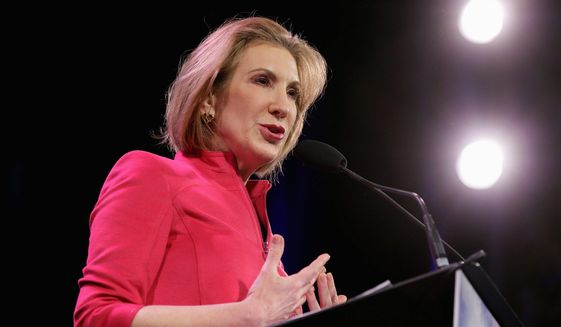 Washington, May 4 (IANS) Carly Fiorina, former CEO of Hewlett-Packard, has formally announced that she will seek the Republican nomination for the presidency in 2016 and so becomes the first woman to enter the race on the conservative side.

Efe news agency reported on Monday that Fiorina, 60, announced her candidacy in a video on her new campaign website and in an interview on the ABC television network, during which she called herself “the best person for the job” because she understands “how the economy actually works”.

Fiorina was chief executive officer of the Hewlett-Packard company between 1999 and 2005 and has never held political office, though in 2010 she unsuccessfully tried to take the Senate seat for California from incumbent Senator Barbara Boxer, a Democrat.

Since last December, Fiorina has made the rounds of several states trying to pick up votes and has been highly critical of former Secretary of State Hillary Clinton, the other woman aiming to take the presidency in 2016, but on the Democratic side.

Monday was also the day that neurosurgeon Ben Carson formally announced, during a speech in Detroit, that he aspires to the Republican candidacy, becoming the first African American to do so.

Then on Tuesday, the ex-governor of Arkansas, Mike Huckabee, is expected to throw his hat in the ring for the Republican nomination, and plans to announce his candidacy at an event in his hometown of Hope, Arkansas.

Experts give little chance of victory to Fiorina, Carson or Huckabee, who will make their bids for the White House against three other hopefuls for the Republican nomination who are already in full campaign mode: Senators Rand Paul, Ted Cruz and Marco Rubio.

Florida’s ex-governor Jeb Bush has not yet formally announced his run but has been campaigning for months, while another contender on the Republican side is expected to be Wisconsin Governor Scott Walker.

On the Democratic side, the list is much shorter, with only two hopefuls for now — Hillary Clinton, ahead in all the polls, and the independent Senator Bernie Sanders, who defines himself as a socialist.