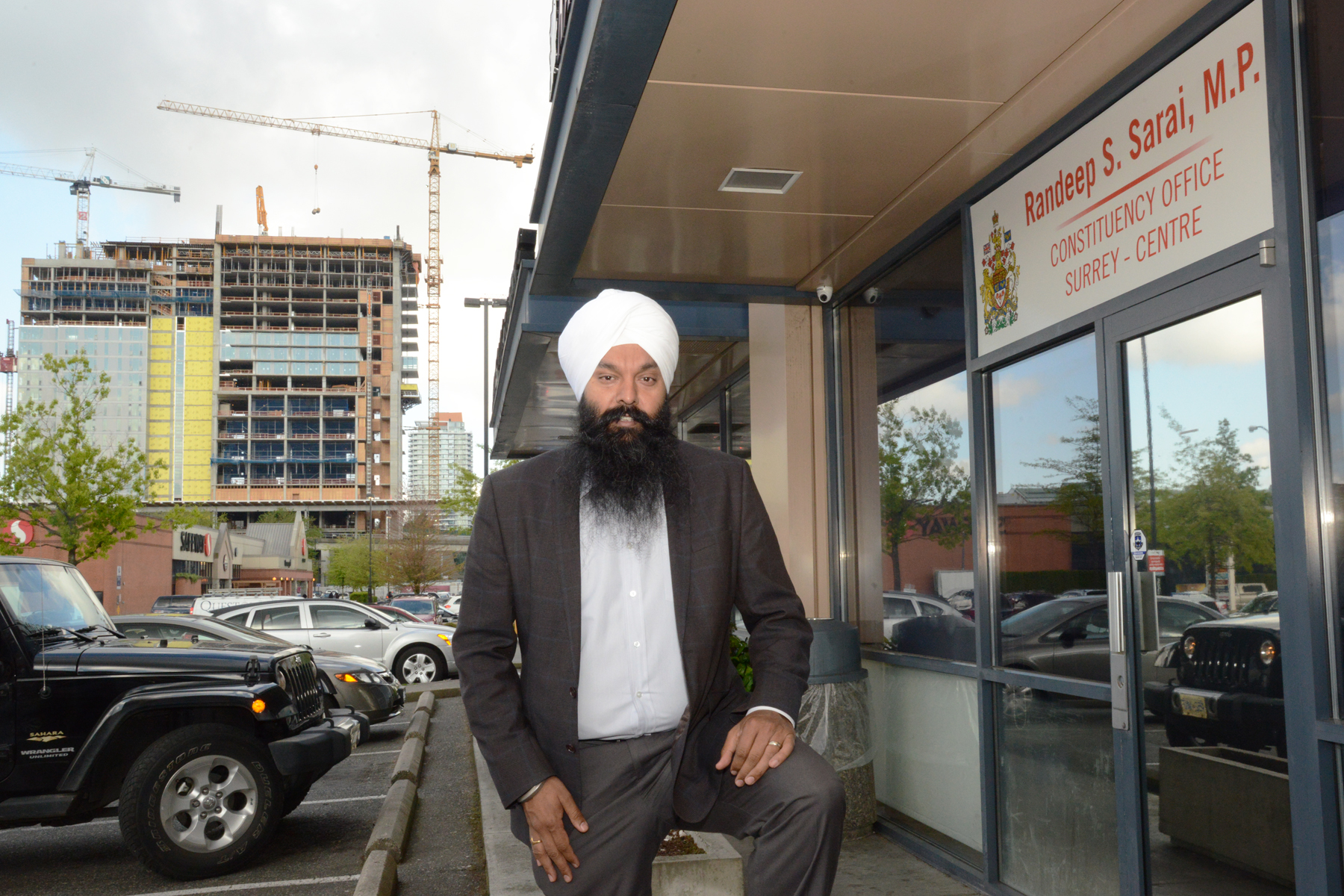 In high school in Burnaby, Randeep Sarai, was picked to go to the National Crime Prevention convention in Montreal. Following his legal training at Queen’s University, when working with a law firm in South Vancouver, he was motivated to act when the body count from gang violence topped 100. He went to former Judge Wally Oppal, and Kash Heed, who was West Vancouver Police Chief, and became involved in bringing most of the Temple groups together with other police representatives from Abbotsford to Vancouver, including Richmond, Burnaby and Surrey to come up with a strategy on how to combat the problem. This convinced him how getting active to solve a problem actually produced positive results, which set the direction that would take him into the Liberal Government of Justin Trudeau as the Member of Parliament for Surrey Centre.

Sarai spoke with Ray Hudson about his journey and his goals as a member of Parliament, and how he plans to make a positive impact on Canada.

Hudson: How did your anti-gang activism turn out?
Sarai: We worked with Rich Coleman, who was Solicitor General at the time, and got the Integrated Gang Task Force. That showed me that if you get involved and work rather than sit inside and complain, you can actually implement policy and get effective results.

Hudson: What are the prime issues you’re concerned with in Surrey?
Sarai: I don’t like Surrey being plagued with the gang-style shootings, the property crime, and domestic violence. I think we have to work equally on the preventative side, intervening for those who can be redirected from the life, and pushing for strong enforcement and teeth in the law.

Most of those involved in the flamboyant gang-style violence are not young offenders, and not necessarily from the lower economic scale. We’ve got to show them that they’ll end up in jail or in a coffin, which isn’t glamorous at all. Another problem is property crime, a lot of it drug related, and I think a lot of that in Surrey is a result of the highest concentration of unregulated rehabilitation services in the province (80%). I’m not talking about the very valid and genuine services that are being offered. These unregulated operators just rent a house, create a program, pack it up with twenty offenders and collect their welfare cheques.  What it’s really doing is proliferating the drugs, with theft and the crime in that area, and we want to nip that in the bud. I think that if the city, federal and provincial governments can work cooperatively we can resolve a lot of these issues.

Hudson: A lot of property crime is done by a small number of people.  We’ve got some people on the street with twenty and thirty convictions or more, and to be blunt, isn’t that your job as government to protect society?
Sarai:  Absolutely, and I think we need to work on that.  I think that a lot of the sentencing problem arises if they were doing crimes under $5,000 and therefore the number of the person’s crimes doesn’t effect the sentence. Perhaps that’s why they were getting away with it.

Hudson: Domestic violence: Many people may be vulnerable because of language limitations, and because in some countries, some forms of abuse are not even considered domestic violence.  What are your plans to improve outcomes on that issue?
Sarai: When new Canadians arrive, it’s absolutely essential that women are told of the resources available to help them if they’re in, or potentially facing a violent situation. Our community organizations, church groups and temple groups can help with this.  Women need to know where they can go to get help, and men should be taught that we do things differently in Canada, that there is no tolerance for any physical abuse, and there are ways, other than violence, to channel their aggressions.  Many times they come from a culture where abuse of women is seen as acceptable.  In Canada this abuse is unacceptable. I think on the very egregious side, there have been some killings. I can tell you, the RCMP, very diligently and thoroughly, have achieved convictions, or have people up for trial for the rest. I think the message has been loud and clear that there is zero tolerance for abuse.

As a government, for immigration purposes, we have changed the condition requiring spouses to stay married for two years to qualify for permanent residency. Before, women were exploited, enduring very harsh relationships out of fear of deportation. Now, when sponsoring a spouse from anywhere around the world, they get permanent residency on landing.  It’s better to reduce domestic abuse, and risk the occasional marriage of convenience.

My second major issue is infrastructure. The City of Surrey is lacking in infrastructure specifically public transportation. We contribute 20% of all fees and contributions to TransLink but we have less than six percent of the track.  We need our due share and the LRT or a rapid transit program needs to be done. I think it’s the only way to help middle class families. I think the transit planners have to realize that everyone isn’t trying to get to Vancouver anymore, and reflect that in the way they plan their systems.

It’s very important to counter the idea that Surrey must be a bedroom community for Vancouver. To counter that, I’m trying to bring to Surrey, the Prime Minister, and as many Ministers as possible. I want them to see first hand, the economic reality that is Surrey, a city that is located on the US border with a lot of trade going back and forth every day. Surrey has the Fraser River ports, the mills along the river, a lot of small and medium sized businesses. I believe my riding, Surrey Centre, has the highest concentration of Forestry workers of any riding in BC, with many small mills on the river front. These are all things that people forget, and why I want to bring the Cabinet to see the City of Surrey, and keep the reality of it front and centre, for these decision makers.

This is what we’ve achieved for Surrey so far: