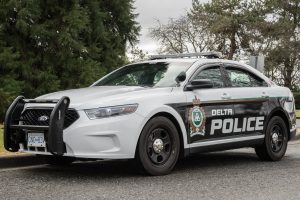 Delta Police have a team called the Patrol Support Team, which supplements the work that our front line officers do, allowing them to focus on thorny issues, when crime trends pop up.

Recently a recreation centre in North Delta had been experiencing a problem with thefts from lockers, so when staff spotted some suspicious behavior the afternoon of July 3, they were quick to call Delta Police.

Officers from the Patrol Support Team were in the area, and intercepted the suspects walking away from the area, arresting them on suspicion of theft.

“Fortunately officers were able to recover a number of stolen items, include a phone and clothing,” says Cris Leykauf, spokesperson for Delta Police. “

Two individuals were arrested at scene, and were released pending an upcoming court date. In the interim they have been banned from the recreation centre.

“Staff at the recreation centre were extremely helpful in providing a very timely alert to police,” notes Leykauf. “In situations such as this, when a crime is suspected to be in progress, the public is encouraged to call 9-1-1 so police can respond quickly.”

Unfortunately, thieves will sometimes target individuals or areas such as locker rooms for theft, so the public is advised not to take any valuables with them into these areas if possible.