Asian Journal
Home Headlines Cell text may have saved others in Manitoba house fire that killed... 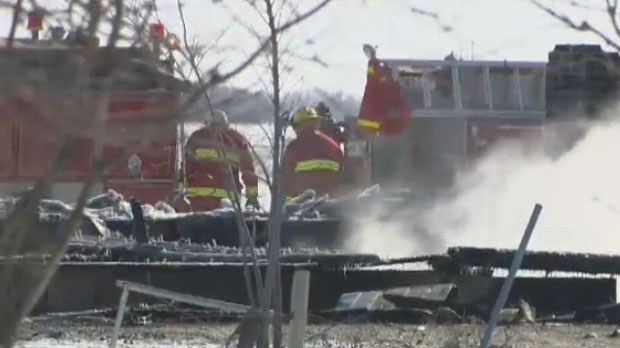 By Steve Lambert, THE CANADIAN PRESS

KANE, Manitoba: Beverley Eberhardt would often babysit her eight grandchildren and have them over for sleepovers, and now half of them are gone.

Four boys were killed early Wednesday when their home in southern Manitoba burned to the ground. Their mother woke up during the blaze and managed to get out safely with her three youngest children. Their father and oldest brother had been at work.

“I thought this was some kind of prank, but found out it was real,” Eberhardt said Thursday, sitting in the cluttered kitchen of her mobile home in Morden.

She said her son-in-law, Jake Froese, had been working the night before with 18-year-old Steven at an industrial painting business in Winkler, Man. When they finished their shifts just after midnight, Steven texted his mother to tell her they were hungry and headed home.

Doralee Eberhardt was awakened by the sound of a beep from the message and realized the house was on fire, said her mother.

She grabbed the two girls and a boy who were with her on the main floor and got them outside. She then tried to get to the older boys on the second-floor and hollered at them to wake up, but the smoke was too heavy and the flames too hot.

Beverley Eberhardt said when her son-in-law and oldest grandson got there, they called 911 and also tried in vain to get inside the burning building. They then got a ladder and Froese climbed to a top window. But when he broke the glass to get in, he was knocked down.

“They tried everything,” said the grandmother. “It was too late.”

She said the parents are still being treated for smoke inhalation in hospital. Steven and the remaining children _ Susie, 8, Lisa, 5, and William, 2 _ are staying with family and friends.

She described her lost grandsons as “very special” boys.

Bobby, 15, always had his nose in a book, a mystery novel or a fantasy tale about dragons, she said. He loved school and would have chosen classes over summer holidays.

Timmy was a jokester who liked hunting with his dad and fixing things with tools. The 12-year-old mowed his grandmother’s lawn and planned to cut others in the summer to pay for his cellphone.

Timmy was tightest with Danny, 11, the wild one who “knew how to push everyone’s buttons, even his teachers’,” said Eberhardt. When he last got into trouble at school, he told his grandmother it was because he had been chasing someone with an air freshener.

Henry, 9, was quiet and liked to play video games and sing. Once when he went to church with his grandmother, he told her his favourite song was “Jesus Loves Me.”

People in nearby communities have been raising money and collecting clothing and household items to help the family on some fundraising sites and through a Facebook page called “Kane Fire Tragedy.” Ralph Groening, reeve for the RM of Morris, said $15,500 had been raised by Thursday afternoon.

The family has even received an offer of a house.

Eberhardt said she doesn’t know what they plan to do. She thinks the memories of the boys would make it too painful for their parents to stay in the area.