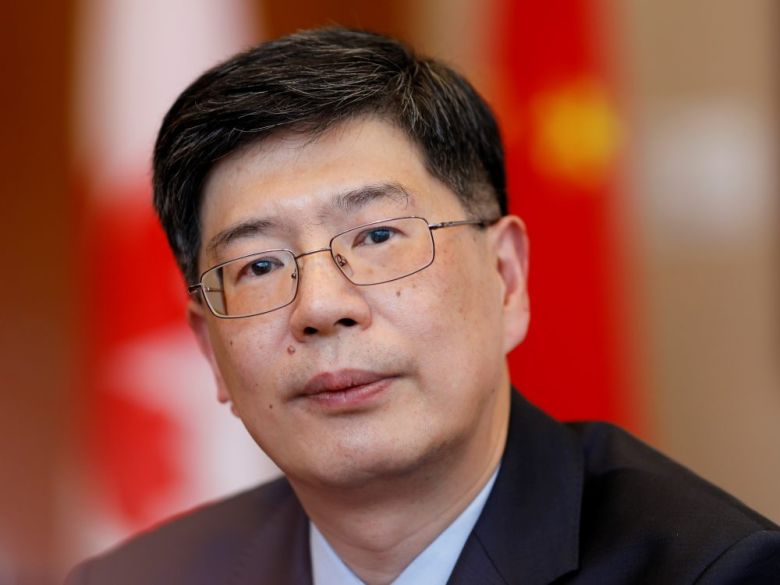 Ottawa: China’s envoy in Ottawa says that while the United States is “smearing’’ his country over COVID-19, the People’s Republic appreciates Canada’s “cool-headed’’ co-operation on battling the pandemic.
Ambassador Cong Peiwu also says he wants Canadians to know that Michael Kovrig and Michael Spavor are healthy and getting good treatment in Chinese custody.
The two Canadians have been detained for more than 500 days and China cut off their visits from Canadian diplomats earlier in the year as part of its efforts to limit access to prisons during the pandemic.
In an exclusive interview with The Canadian Press, Cong said he has heard nothing new about a proposal by Foreign Affairs Minister Francois-Philippe Champagne to allow diplomats to conduct a “virtual’’ visit using the internet to check on Kovrig and Spavor.
They were imprisoned in December 2018 after Canada arrested Chinese high-tech executive Meng Wanzhou on a U.S. extradition warrant, plunging Sino-Canadian relations to a new low.
Cong says Canada and China are working closely to fight the pandemic, and that he is awaiting a report from his government on how a million face masks that Canada imported from China were found to be inadequate for health-care workers.
“China attaches high importance to export quality control. The competent departments have recently written out more rigorous regulatory measures,’’ said Cong.
“We still are waiting for the response from the government because there was a report suggesting that some masks didn’t meet the quality standards. We would like to see clarification, but still we haven’t got an answer yet.’’
The legal issues in the Kovrig-Spavor-Meng dispute remain unchanged: China says Canada’s arrest of Meng, who faces bank-fraud charges in the United States, is unjust; Canada says Kovrig, a former diplomat, and Spavor, an entrepreneur, were picked up arbitrarily.
But Cong positioned Canada as an important partner for China in the continuing battle against COVID-19 and he used the interview to unleash a counterattack against the U.S., which has temporarily suspended all funding to the World Health Organization.
Cong didn’t not mention President Donald Trump by name, but he referred to his administration’s accusations that the WHO covered up early aspects of the outbreak and that China initially withheld information about it from the organization.
More recently, Trump and his supporters have also been putting forth a conspiracy theory that an infectious disease laboratory in Wuhan, China was the source of the pandemic. A U.S. intelligence statement released Thursday says the virus that causes COVID-19 was not deliberately engineered, but work is continuing to determine whether it might have escaped the Wuhan lab while being studied.
“China is sharing experience while the U.S. is smearing China,’’ said Cong. “China has actively shared epidemic information and anti-epidemic experience with the WHO and many other countries including Canada.’’ That co-operation has extended to 150 countries and international organizations, including on recent video conferences, he added.
“To shift the blame, some U.S. politicians try to launch a stigmatization campaign against China. Attacking and discrediting other countries will not save the time and lives lost.’’
Cong was also asked about Conservative politicians in Canada, who are demanding answers directly from the WHO and are questioning whether China has undue influence on the organization.
“It’s a time to focus on the fight against the pandemic. Unfortunately, some politicians have greatly politicized the COVID-19 issue. Actually, we don’t think it’s the time for accusations and political manipulation,’’ he replied.
Champagne and Prime Minister Justin Trudeau have said that now is not the time for finger-pointing with the pandemic still a threat, but have suggested a reckoning could come later.
“I believe that Canada has adopted a cool-headed approach,’’ Cong said.

“We appreciate that. The most important task, currently, is to focus our energy on fighting the pandemic.’’
He said China is committed to helping Canada receive all the medical equipment and supplies it needs during the pandemic. He also said Canada is grateful for Canada’s shipping medical supplies to China early on.
China is preparing to ship 32 tons of diagnostic kits, N95 masks, isolation gowns and other equipment soon, Cong said.
China is also trying to smooth the passage of Canadian goods through Shanghai’s crowded airports, he said, and added it currently has no restrictions on how long the ground crews of chartered cargo planes can wait on the ground to be loaded up.
China and Canada disagreed recently on whether that was a factor in two Canadian planes’ returning from China without the medical supplies they were sent to pick up.
“Our two countries have a tradition of supporting each other in trying times,’’ said Cong.
“As you could recall, during the most difficult period in our fight against the pandemic, the Canadian side provided us with assistance and support, and we value that very much. As the pandemic is spreading in Canada right now, we relate to the hardship the Canadian people are going through.’’
The status quo remains for Kovrig and Spavor, who are in Chinese prisons facing accusations of espionage. The Canadian government calls their arrests arbitrary. China continues to call for Meng’s release, and Canada says her extradition case will have to be heard by the B.C. courts. The pandemic has all but halted those legal proceedings for the time being.
Cong said Kovrig was allowed a phone call to his father in March who was “seriously ill at the time,’’ but he offered no other details. Kovrig and Spavor, along with other prisoners are all being given better food, and they are both being allowed a “higher frequency’’ of parcels and letters.
“They’re in good and sound health,’’ said Cong. “That’s a message I would like to share with you.’’