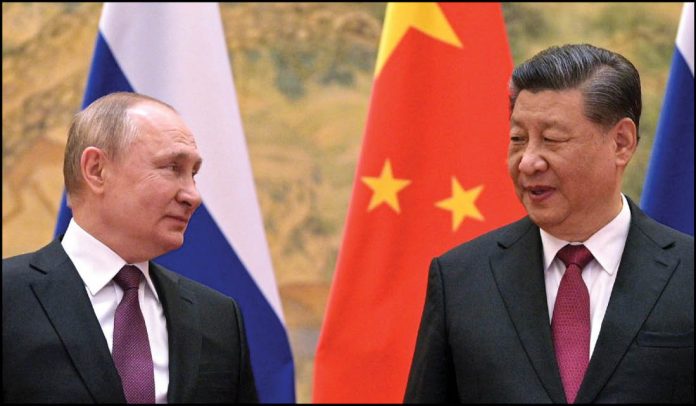 Beijing (AP): China’s support for Russia through oil and gas purchases is irking Washington and raising the risk of U.S. retaliation, foreign observers say, though they see no sign Beijing is helping Moscow evade sanctions over its war on Ukraine.
Beijing’s importance as a lifeline to Russian President Vladimir Putin rose Monday after the 27-nation European Union, the main market for fossil fuels that supply most of Moscow’s foreign income, agreed to stop oil purchases.
President Xi Jinping’s government declared ahead of Russia’s Feb. 24 attack that it had a “no limits’’ friendship with Moscow and has kept the West guessing about whether it might bail Putin out.
China rejects the sanctions as illegal because the United States, Europe and Japan cut off Russia from their markets and the global banking system without working through the United Nations, where Beijing and Moscow have veto power.
The sanctions don’t prohibit China, India or other countries from buying Russian oil and gas. But President Joe Biden has warned Xi of unspecified consequences if Beijing helps Moscow evade sanctions. That leaves open the risk Chinese companies might be punished by losing access to valuable Western markets.
Beijing appears to be complying. But state-owned companies are buying more Russian oil and gas, which gives the Kremlin export income. They also are potential investors in Russian energy projects as Western companies leave.
“The Biden administration will likely become increasingly exasperated at China’s continued support for Russia,’’ Neil Thomas of Eurasia Group said in an email.
That increases the likelihood of “unilateral moves to punish Beijing’’ and “allied coordination on economic security measures aimed at countering China,’’ Thomas said.
The conflict adds to tension with Washington over Taiwan, Hong Kong, human rights, trade, technology and Beijing’s strategic ambitions.
China poses the “most serious long-term challenge to the international order,’’ Secretary of State Antony Blinken said in a May 26 speech.
Xi’s government has tried to distance itself from Putin’s war by calling for peace talks, but it avoids criticizing Moscow.
Other governments ‘’must not harm China’s legitimate interests in any way“ in dealing with Ukraine, warned a foreign ministry spokesman, Zhao Lijian.
Monday’s decision by EU leaders will cut imports of Russian oil by 90%, according to the head of its executive branch, Ursula von der Leyen. European customers have been paying Russia as much as $1 billion per day for oil, gas and coal.
Mikhail Ulyanov, Russia’s permanent representative to international organizations in Vienna, responded on Twitter: “Russia will find other importers.’’
Moscow is tiny as a trading partner for Beijing but an ally against what both resent as U.S. dominance in global affairs.
China sees Russian oil and gas as a way to diversify supplies for its energy-hungry economy. China bought 20% of last year’s Russian crude exports, according to the International Energy Agency. The two sides announced a new 30-year gas contract on Feb. 4, three weeks ahead of Moscow’s attack on Ukraine, that the state newspaper Global Times said will increase annual supplies to China by about 25%.
While the two are friendly, China is taking advantage of the situation to get cheaper energy and favorable business deals, said Maria Shagina of the International Institute for Strategic Studies.
“They would always capitalize on Russia’s isolation,’’ said Shagina. “But they would be very cautious not to violate sanctions outright.’’