Until a few years ago, hundreds of potters and their families would be overworked in the run up to Diwali, churning out tens of thousands of small and big clay lamps that would brighten innumerable homes and businesses.

“There is a huge fall in the sale of diyas. For what is supposed to be a festival of lights, our life has entered a dark phase,” Harkishan, the head of Kumhar Gram, Delhi’s largest colony for potters, told IANS.

“Diwali has lost its traditional charm as Chinese products have taken over the Indian markets.

“People are more interested in decorating their homes with Chinese lights or jelly candles rather than with the traditional diyas,” he said.

Harkishan, 60, who won the National Award for Terracotta art in 1990, is not the only one despairing.

Harkishan, who arrived in Kumhar Gram in 1971 from Haryana, said the latest products in markets had jolted their business. “Every year there is at least a 30 percent fall in sales.

“Chinese products are choking our business,” he said, adding that today’s young ones may simply turn their back on diyas and other earthen products.

“Earlier we did not even get time to rest during Diwali. But now we do not even sell half the products we prepare. Diwali is no more a busy time,” added Krishna, who learnt the craft from her family elders.

“Now people head to malls and supermarkets. They are no more interested in buying earthen lamps and more from potters,” Krishna told IANS.

“Worse is they don’t mind spending more on other products. We hardly get a customer or two now. How can we survive?”

Others in the potters’ hub said that often prepared products — including diyas — remain unsold. This never used to happen until about five years ago.

There was a time when Indian families went only for simple earthen lamps. Now the demand is mainly for decorated and fancy lamps. 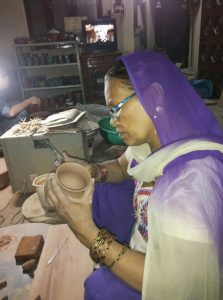 No wonder many potters are slowly moving away from their traditional business in search of greener pastures.

“Only years ago our shops used to be crowded during Diwali. Now we wait and wait for buyers,” complained a woman who has been selling clay products in Malviya Nagar in south Delhi for the past 30 years.

Different types of clay are used to prepare diyas. Much of it comes from Haryana, Harkishan explained, adding that even the quality of clay was not as good as it used to be earlier.

Potters are angry that successive governments have not done much to protect the traditional business of pottery.

“Earlier soil (clay), used to prepare diyas, was easily available in Delhi itself,” another potter said. “Now we have to bring it from states such as Haryana and Rajasthan.

“We face several problems while transporting the clay. Shouldn’t the government be taking care of such simple issues?”