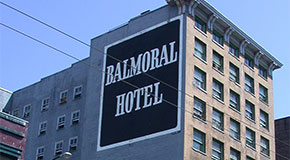 The City of Vancouver’s Chief Building Official has determined that the structural and fire concerns at the Balmoral constitute an unsafe condition and has issued an order pursuant to the Vancouver Building Bylaw directing that occupancy of the Balmoral cease as of June 12 and that the repairs be undertaken to ensure that the building does not collapse.

The City expects the owners to immediately commence the repair work once the tenants are safely out of the building and is prepared to undertake the work and charge the costs to the owners if they do not comply.

The goal of the City of Vancouver is to ensure the building is rehabilitated and can be safely reoccupied as soon as possible. City is reviewing what additional legal tools or resources may be available from a new provincial government.

Evacuating and relocating tenants from the Balmoral was a last resort decision but it is clear from the professional assessment of the building that the imminent risk is too great for the residents to remain.

While it is the owners’ legal obligation to support tenants with relocation under the Residential Tenancy Act, the City, BC Housing, Vancouver Coastal Health, tenant advocates, and other community partners will provide supplemental support to help tenants find alternate housing and get access to other supports.

The supports will be available immediately upon today’s Order issuance and over the course of the coming days and weeks as tenants move out of the building.

The Balmoral, at 159 Hastings Street, is a 176 room Single Room Accommodation (“SRA”) hotel that serves low income tenants on the Downtown East Side. The building is owned by the Sahota family and has been a significant problem for both the VPD and the City for decades.  Over recent years, the conditions of the building have deteriorated and have become unacceptable for tenants.

Once the building is stabilized, engineers will continue to assess the full scale of damage and required work. Once the scope of work is better understood, City staff will pursue all available means to ensure the building is remediated.

The City is committed to ensuring that important SRA and social housing stock is available for Vancouver residents like the people who live at the Balmoral Hotel.

Vancouver City Council has allocated $2Million in the 2015-2018 Capital Plan for upgrades to private SRO’s.  We are also working with our partner BC Housing who has demonstrated their commitment to affordability through their investment of $147 million for the renovation of 13 SRO’s comprising almost 900 rooms in the City of Vancouver

As a prerequisite for any funding contribution, the City would require an agreement between the owner and a non-profit operator to manage the building, which will improve supports and quality of life for all tenants.  Although the current state of the building is deplorable and unfit for occupation, the Balmoral represents a critical source of housing for low-income residents. The City is seeking to preserve this stock for residents over the long term, in safe and acceptable conditions.

The Balmoral, at 159 Hastings Street, is a 171-room Single-Room Accommodation (“SRA”) hotel that serves low income tenants on the Downtown East Side. The building is owned by the Sahota family and has been a significant problem for both the Vancouver Police Department (VPD) and the City of Vancouver for decades. Over recent years, the conditions of the building have deteriorated and have become unacceptable for tenants.

In early 2016, the City escalated enforcement efforts in the Balmoral.

In June 2016, inspection identified deterioration of a beam in the basement and the City ordered an emergency engineering review. The review concluded that the basement, main floor and mezzanine were unsafe to occupy, and all were ordered to be vacated by the CBO. This structural issue was resolved but the basement of the Balmoral has not been re-occupied.

In the fall of 2016, the City launched proactive enforcement in the most at-risk buildings in the City, and the Balmoral topped the list. The City increased the frequency of inspections of the building with a cross-functional team from VPD, Vancouver Fire and Rescue Services, and staff from the City’s Buildings, and Property Use team. This team proactively reviewed the building for fire, safety, structural, and standards of maintenance issues and wrote orders for noncompliance.

From November 2016 through May 2017, the City generated eight inspection reports and wrote seven orders, to address 183 outstanding deficiencies. The City sought to work with the owners to correct the orders.

The total number of outstanding orders is currently six, representing 150 outstanding deficiencies.  64 of those deficiencies have already been referred for prosecution.  Two of these orders from the Chief Building Official in March and April 2017 were to direct the owners to address the remediation work recommended in a structural engineering report and building envelope condition report conducted in November 2016.

On May 26 the professional engineering firm retained by the owners delivered a concerning report to the City which suggested that the building’s overall structure may be compromised due to water damage and rot.