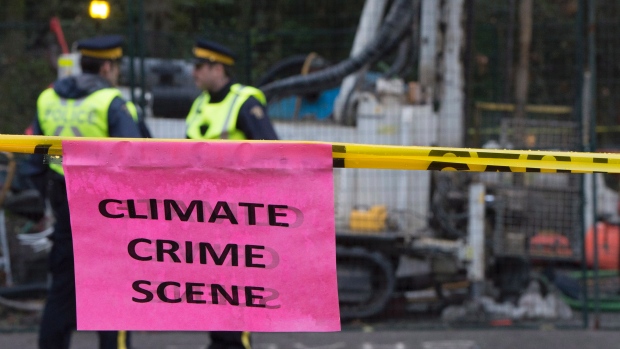 BURNABY: A group of activists who were part of the Clayoquot Sound protests in the early 1990s, which saw thousands blockade logging trucks in a remote area of Vancouver Island, were arrested Wednesday at an anti-pipeline demonstration near Vancouver.

Five former Clayoquot Sound protesters were the latest to be arrested on Burnaby Mountain, where police have been enforcing an injunction related to Kinder Morgan’s proposed Trans Mountain pipeline expansion. At least 100 people have been arrested so far.

The demonstrations on Burnaby Mountain, where anti-pipeline activists set up an encampment in an attempt to block survey and drilling work, prompted immediate comparisons to Clayoquot Sound.

The protests in the summer of 1993 became known as the War of the Woods. They ended with more than 800 arrests, prompted changes to logging practices in B.C. and drew public attention to the issue of clear cutting in old-growth forests.

Valerie Langer, who was an organizer with Friends of Clayoquot Sound in 1993 and was arrested in Burnaby on Wednesday, said the Kinder Morgan survey work represents a “breaking point” in what she described as a growing anti-pipeline movement.

“We saw that there was a feeling that was happening that reminded us very much of the feeling of when things were getting started on the Clayoquot campaign,” Langer said in an interview before her arrest.

Langer, who now works for ForestEthics Solutions, which is connected to U.S.-based ForestEthics, took on an organizational role in summer of 1993 and wasn’t arrested then. She had already been arrested four times for protests before that summer.

On Wednesday, Langer and her fellow Clayoquot activists addressed supporters before walking up to a line of police tape. As a choir sang, they linked arms and calmly walked underneath the tape, which RCMP officers lifted to make it easier to pass through. They stood for a few minutes holding signs, including one that said For Clayoquot Sound, until they were carried away by RCMP officers.

She said opponents of pipelines _ and, more importantly, the Alberta oil that fills them _ feel regulators and politicians are not listening to their concerns, leaving them with few options but risking arrest through civil disobedience.

“This isn’t what democracy should look like, but sometimes it’s the best thing you can do for democracy,” she said.

“When every other legal avenue has been taken _ people have tried to do public input, there are literally three court cases currently _ then there is no better thing a person can do.”

Kinder Morgan is conducting drilling at two sites on Burnaby Mountain, which is home to Simon Fraser University, as it prepares for the federal environmental approval process. The company’s preferred route for the expanded Trans Mountain pipeline, which would have its capacity tripled, would tunnel through the mountain.

The company obtained a court injunction to clear the protesters away from its work sites. The injunction took effect last Monday, though RCMP waited three days before making arrests.

David Tindall, a University of British Columbia sociology professor whose work has focused on the environmental movement, said there are many similarities between what happened in Clayoquot Sound two decades ago and the protests on Burnaby Mountain.

The Clayoquot Sound protests were successful in influencing public opinion against clear cutting, which in turn added pressure on the province to act. However, Tindall in an interview said the political realities are different today.

“Even though there are some levels of government that are totally on side with the environmentalists (in opposing the pipeline), like the City of Vancouver and the City of Burnaby, the ultimate power in this is with the federal government,” he said.

“Unless they (the federal Conservatives) fear that support for these protests will actually cost them in the next election, I’m not sure there’s the same sort of leverage.”

On Thursday, Grand Chief Stewart Phillip of the Union of B.C. Indian Chiefs is expected to attend the protest site and be arrested himself.

Kinder Morgan is expected to return to B.C. Supreme Court on Thursday to ask a judge to expand the company’s current injunction. A court application seeks to increase the area covered by the injunction, as well as extend the court order to Dec. 12 rather than its current expiration of Dec. 1.

The B.C. Civil Liberties Association says the request to expand the injunction zone could mean some arrests in the past week were illegal.

By James Keller in Vancouver