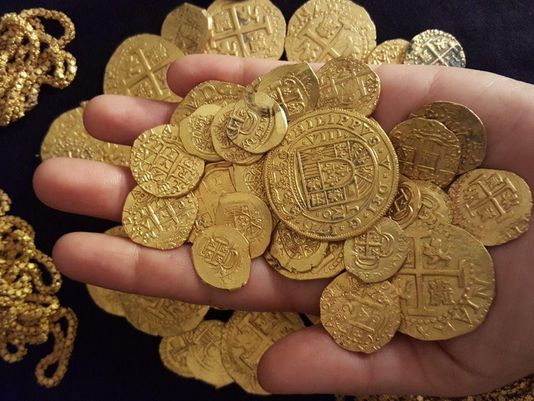 Miami, July 28 (IANS/EFE) A family of treasure hunters from Florida have discovered at the bottom of the sea, with the aid of a metal detector, 52 gold coins valued at more than 900,000 euro ($1 million) from an 18th-century Spanish galleon.
Eric Schmitt and his family recovered from a depth of 4.5 metres off Fort Pierce in the southeastern county of St. Lucie, 52 gold coins from one of the 11 Spanish galleons that were sunk by a hurricane on July 31, 1715.
One of the gold coins was of the kind known as “Tricentennial Royals”, which were “presentation pieces not meant to be circulated as currency”, and has a value, according to Schmitt, of some 452,509 euro ($500,000), the Orlando Sentinel reported.
Co-founder of the 1715 Fleet-Queens Jewels company, Brent Brisben, also the owner of diving rights at the site of the shipwreck where the coins were found, said their excellent state of preservation was amazing.
As for the presentation piece, “it’s incredibly rare and incredibly valuable”, Brisben said, adding that only about six such coins were known to exist.
This wasn’t the first time the Schmitt family found treasure from sunken galleons.
In 2014, they recovered a valuable “gold-filigree pyx, a vessel used to hold the Eucharist during the Christian observance of Holy Communion”, the Sentinel said.
The golden pyx was handcrafted between the late 17th and early 18th century, and was also part of the treasure being transported by the doomed Spanish fleet.
In 2013, the family recovered a golden chain some 15 metres long, plus a quantity of gold worth 452,509 euro ($500,000).
The Spanish fleet set sail from Havana in 1715 headed for Spain with a cargo of gold for the crown, but 11 vessels were shipwrecked off the Florida coast by a hurricane that also took the lives of at least 1,000 people aboard.
Part of the gold, silver and other objects scattered across the sea bottom were recovered after the storm, but historians and treasure hunters believe that millions of dollars in silver and gold still remain in the depths of the ocean.
State regulations require that about 20 percent of the rarest treasure must be displayed in museums, while the rest is to be divided between Brisben’s company and the Schmitts, the newspaper said.