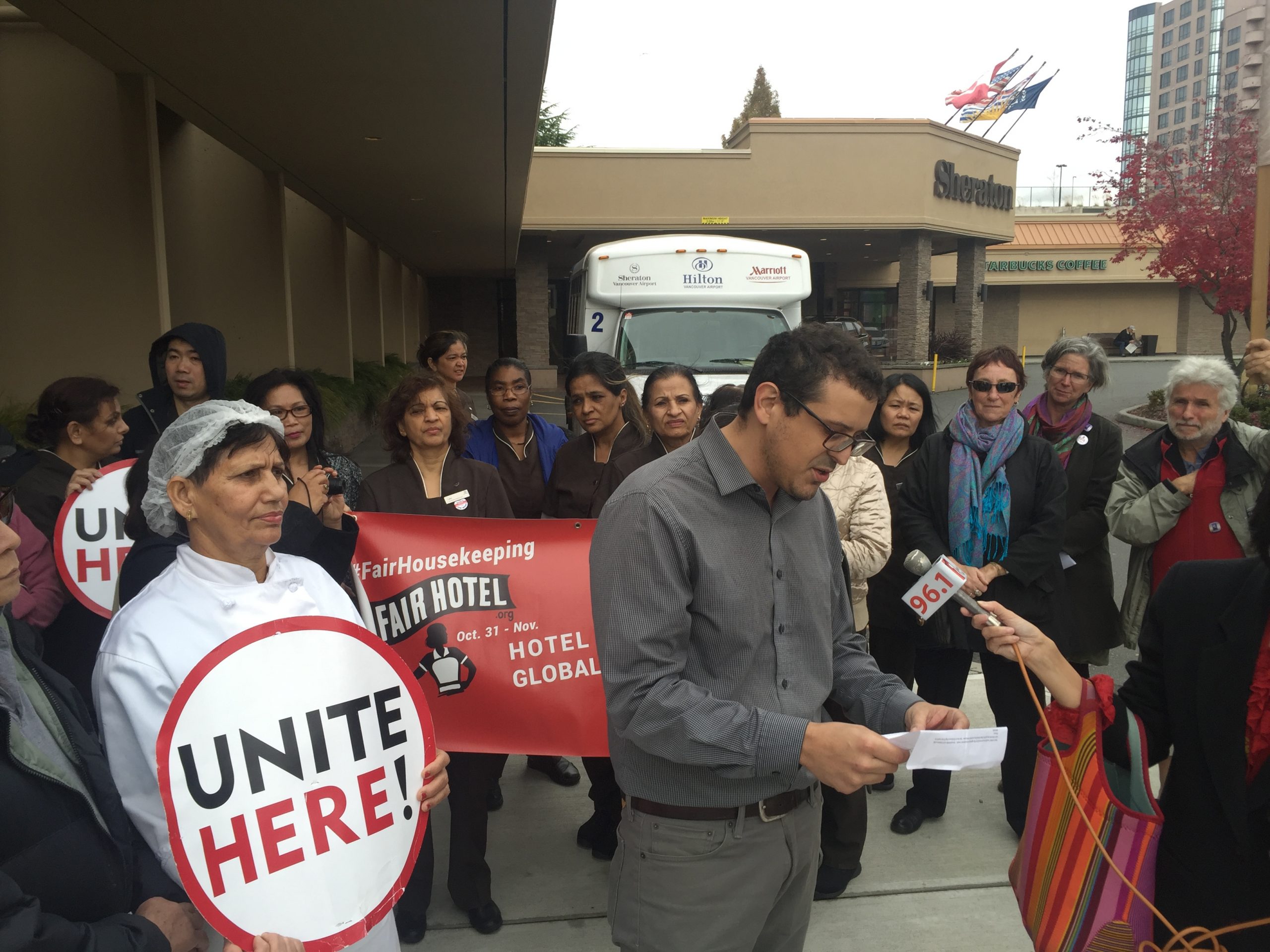 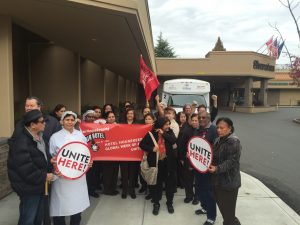 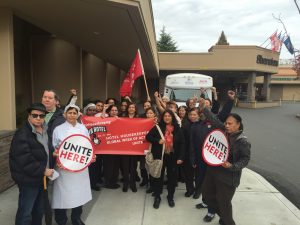 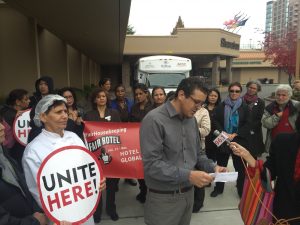 experience work-related pain and who have experienced violations of basic rights in their efforts to organize.

This action was part of the Hotel Housekeepers Global Week of Action, featuring multiple coordinated actions by housekeepers in more than a dozen countries around the world.

“We stand in solidarity with the workers of Sheraton and we appeal to management of the Sheraton to look at the issues and give appropriate wages and conditions for labour,” said Chelliah Premrajah, from the South Asian Network for Secularism and Democracy.  He added, “The large number of employees here are immigrants or are descendants of immigrants.  We want their standard of living to improve, particularly in Richmond, where housing is extremely unaffordable and transport costs are increasing, making it harder to live here.”

Background: Larco Investments, and its affiliate, Larco Hospitality, is a major hotel owner/operator in Canada.  Many of Larco’s hotel employees are first generation immigrants who are Filipino, South Asian and Chinese.  During this week’s Hotel Housekeepers Global Week of Action, community leaders in Vancouver and Toronto will be calling on Larco to stop mistreating workers at their hotels.

In Vancouver, workers at the Sheraton Vancouver Airport hotel, owned by an affiliate of Larco Hospitality, are being squeezed by heavy workloads and lower wage and benefit standards than at comparable hotels, earning, on average $8,000 less annually.

In Toronto, workers at the Renaissance Toronto Downtown Hotel report that Larco Hospitality interfered with their right to organize at the hotel through the use of intimidation and harassment tactics during a union drive this summer.  In response, UNITE HERE Local 75 filed charges against Larco with the Ontario Labour Relations Board.  The workers are currently negotiating their first contract.

Hotel workers, particularly housekeepers, are often immigrants, women, and people of colour, and are the invisible backbone of the hotel industry.  The work they do can be grueling and dangerous.  It entails lifting mattresses that can weigh up to 100 pounds, pushing heavy carts, and dealing with guests behind closed doors.  Heavy and repetitive workloads combined with intense time pressures can contribute to chronic pain and injuries for housekeepers.

Housekeepers affiliated with UNITE HERE in Canada and the U.S. are joining worldwide protests this week to spotlight safety concerns and poor wages faced by women who clean hotel rooms.  The Hotel Housekeepers Global Week of Action is from October 31 to November 6.

UNITE HERE Canada is the union for hospitality workers and represents thousands of hotel and food service workers throughout Canada.