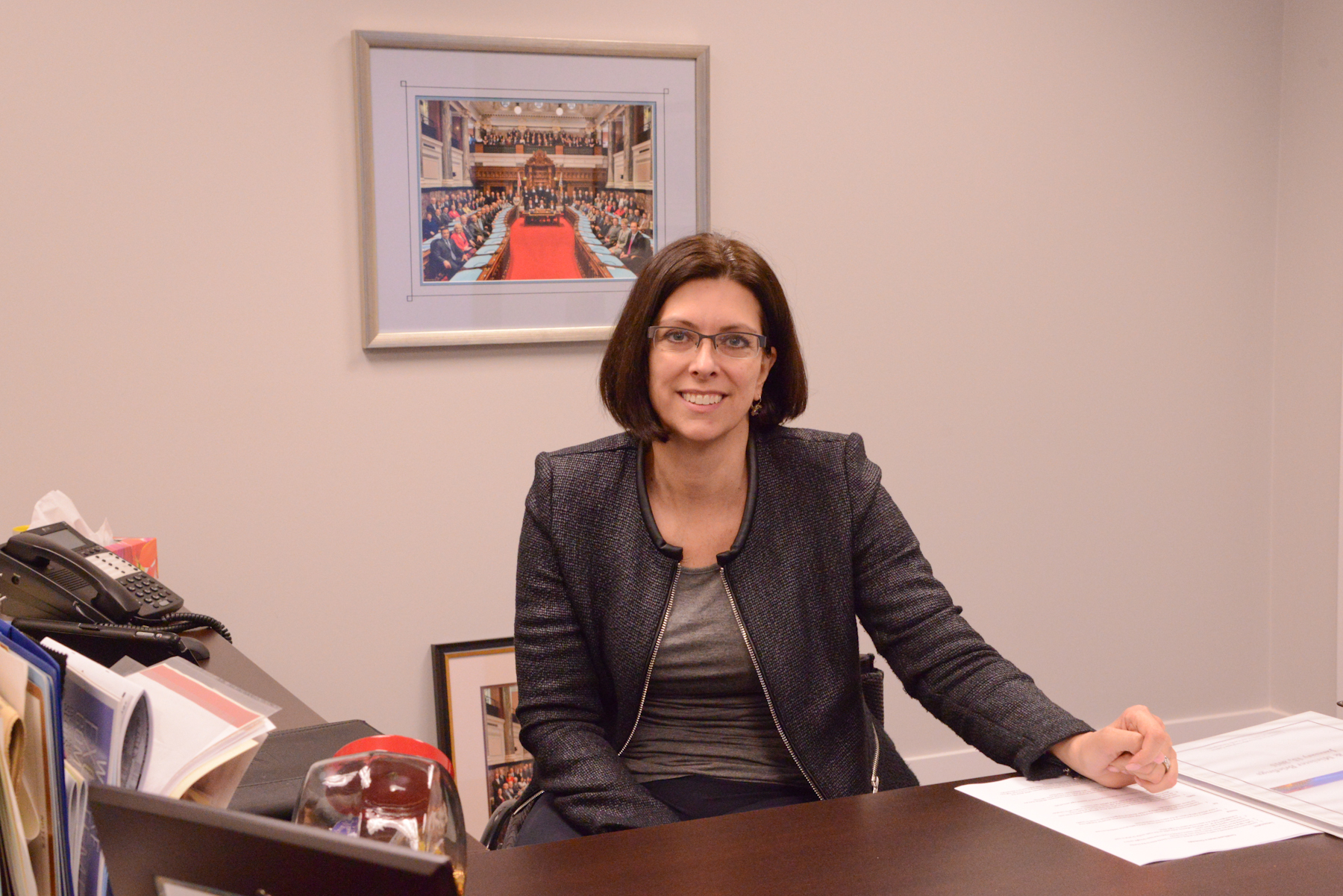 Surrey: Stephanie Cadieux is the MLA of Cloverdale riding, in her second term as an MLA. In the redistribution, she moved her representation from Panorama (now held by Marvin Hunt) to Cloverdale where she succeeded Kevin Falcon.

Cloverdale is the largest riding in the province, not by land mass but by population, 50, 545 reported for the last election. Major residential areas are Clayton Heights foremost, along with Cloverdale town centre and the Morgan Crossing areas.
The riding has major commercial areas in Cloverdale Town Centre, Clayton Crossing along the Fraser Highway and the complexes including Shops at Morgan Creek along 24th Avenue. Although it’s not seen easily, the riding is home to many major industries, has a thriving agricultural industry servicing domestic and import markets.
“There is lots of industry here, mostly unseen, south of Highway 10, in Campbell Heights, and along the Langley Border, including Endurance Wind Power, Delta Controls, International Herbs and Heppells Potato Corp” said Cadiuex, “yet it’s a very community oriented riding, with a ‘small town’ feel. People like the Rodeo, the Blueberry Festival, the Christmas parade among many activities.”
Constituency concerns: Education

Cadiuex said there were a myriad of issues, however many residents identified Education, Security and Policing as the major items of concern.
“Because of rapid growth, school overcrowding, school construction, and things like that are issues for parents.” she said. “That said, we’ve had some success. We’ve purchased the site and begun planning for the construction of the second Clayton Heights high school. Certainly I do know that the vast majority of Surrey School priorities are in Cloverdale. We have regular conversations with a most collaborative School District on to how we can move those projects along.”
“Education is a provincial matter,” she said, “and it’s the topic I speak with my colleagues about most frequently and there is a great understanding amongst my colleagues about it. Also it doesn’t hurt that the Minister of Education is from Surrey, which provides another level of understanding of the current challenge in government. It’s the issue I raise most frequently and I’m not going to let anybody forget about it.”
The Kwantlen Polytechnic University Trades campus in Cloverdale, relates directly to the government’s current and longer-term strategy for meeting the workforce needs in the future.

“We’re talking about the need for skilled trades, because of the potential for LNG, mining, construction and all that goes along with it, to meet the labour market demands from here forward, that’s our major focus.”
“I spoke with a young woman, recently, who not happy in the employment she’d chosen decided she could be a plumber and is going through the training at KPU. She’s loving it! I hope lots of people take a look at the options available in the trades.”
Security and Policing
Cadieux said for the most part, residents in Cloverdale are concerned about property crime, describing it as expensive and disruptive and generates fear around it in terms of personal safety and fear of violent crime.

“We’ve had challenges in Surrey, and some high profile things,” said Cadieux. “From conversations I’ve had with police and counterparts in the government, the statistics aren’t necessarily supporting the perception that crime is growing.” She indicated that nevertheless, that perception is evident.
“I do know that everybody in government is aware, certainly at the municipal level, where they have the responsibility for policing locally,” she said, “but we’re all aware of it at the province where that intersects at a policy level. We are having conversations about these issues and what to do about them.”
Asked about the City’s attempts to acquire a Community Court, she said there were on-going discussions concerning what the best mechanisms are, whether it’s specialized courts or expansion of current court services. She said that the ministry has been doing work on that and talking to Surrey about what is needed.
“These things are very expensive for the taxpayer so we want to make sure we make the right decisions,” Cadieux said. “I am aware of the escalating concerns around personal safety and crime rates, and I have regular conversations with our RCMP and municipal counterparts as well. But I want to add, if people think there’s unlawful activity, or if they know about a crime, they need to report it – no matter how small. That information is important for the police to be able to follow the trends and support their strategies with reports from the community. It’s hard for them to respond to something if they don’t know it’s happening.”
she replied, “I can’t be everything to everybody ever.” speaking to what frustrates her about being an MLA “I can’t be everywhere I’m invited to be, I can’t know everything there is to know, and I have responsibilities elsewhere that adds to the complexity. My job is to be the MLA for Cloverdale, but it’s also to be a representative in government. It takes a great deal of time and energy, but I like both roles very much, even when they are at odds with each other at times.”